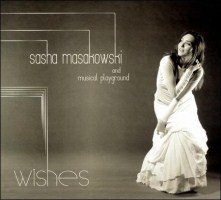 The field of female jazz vocals is somewhat bigger than 40 acres...like, a universe bigger. So congested is the musical ether with this flavor of jazz that it is nearly impossible for an artist to carve out a useful niche. Not that a niche is necessary, but it is nice to have some unifying element or theme in a given project, something not unlike Karrin Allyson's Ballads: Remembering John Coltrane (Concord, 2001). While specifically directed in a different way, New Orleans singer Sasha Masakowski and her band, Musical Playground, achieve a tightly focused theme in Masakowski's debut, Wishes.

Masakowski's musical vision is steeped in the Gulf Rim, beginning in the humidity of the Crescent City and ending in the hotter equatorial climes of Rio de Janeiro. But the singer does not simply regurgitate the same old standards by Brazilian composers Antonio Carlos Jobim or Joao Gilberto. Masakowski makes it a point to mine more obscure veins of the music, enriching the jazz canon with otherwise little known precious gems. The singer's composing simmers and is notable for its carefully crocheted melodies, often quite lengthy and complex. Masakowski's ear for "higher" melody is keen and fully developed, as can be heard on her vocalized duet with pianist James Westfall's solo on the title piece.

But that does not mean Masakowski ignores better known songs. Her light-as-a- feather "St. James Infirmary" incorporates Brazilian influences, as well as Masakowski's special brand of delicately steamy aphorism. The singer's voice modulates from a dense mercuric fluidity to an atomized mist of breathy whisper, potent and sexy. Her Portuguese delivered on the hip-hop tinged "Canto de Ossanah" is unique in its precise abandon. Masakowski and Westfall transform vocalist/composer David Bowie's "Life on Mars" into a modern samba swaying between Portuguese and English, ancient and modern.

Masakowski makes a grand argument for "more is less," by employing spare instrumentation. Her voice is distinctive enough to demand central attention whether at full blow or sotto voce and it is laid naked here. Her material choice shows a daring disregard for the commercial mainstream and a courage to step out and do something different...very successfully.