By Dan Bilawsky
January 1, 2016
Sign in to view read count 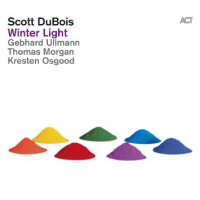 The journey from morning to night, from the dark and promising wintry dawn to the gelid day's goodbye, is one fraught with possibility. At least that's how guitarist Scott DuBois sees it. On Winter Light, Dubois tells the story of a single frigid day. It's as wondrous, chilling, atmospheric, and powerful as can be.

Over the course of seven tracks, DuBois and his longtime band mates—German multi-reedist Gebhard Ullmann, American bassist Thomas Morgan, and Danish drummer Kresten Osgood—manage to paint a picture of placidity and power. In doing so, they touch on nature's fickle ways and the evolutionary wonders that emerge and wane over the course of a winter day. DuBois and company conjure and create space, static air, majesty, fear, the rush of the wind, and the beauty of the light playing off of the ice and snow, simultaneously drawing on the colorful and colorless. This is a band that believes in patience and purpose. It's a group that's more concerned with capturing the transmogrification of nature than simply cutting loose.

The album opens on "First Light Tundra," a piece that finds the dark of night and the light of the morn in conflict. Ullmann's bass clarinet—prayful one moment, pleading the next—seems to represent that very struggle. Next comes the lengthy "Early Morning Forest," bringing a full awakening while also carrying an appreciation for the the calm in the air. Then there's "Late Morning Snow," a soundscape that brings the beauty of the cold into full view; the intense "Noon White Mountain," the peak of all things light and dark; "Afternoon Ice Fog," an ethereal exploration of the way color and light are altered and refracted by ice crystals; and "Evening Blizzard," a sharp reminder of night's imminent arrival. Then "Night Tundra" brings it all to a close as the safety and slumber of nature take hold.

The passage of time isn't fixed here, as DuBois and company use both movement and stasis as tools of creation. And strangely enough, change and permanence manage to team up by playing against one another. DuBois may hang onto airy notions for an extended period or fly like the wind, Ullmann can shriek and seduce, Morgan may be moored to a single note or restlessly moving about, and Osgood is happy sitting in wait, adding cymbal-ic ornamentation, or going with a frenzied approach. It's all part of a winter day for these four.