BY FRIEDRICH KUNZMANN
June 15, 2018
Sign in to view read count 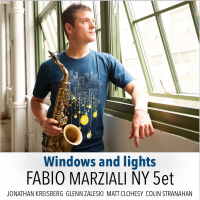 It all started out in a small Italian village near Fermo, roughly two decades ago. It was there, at the age of 18, when Fabio Marziali experienced his first live jazz concert and was immediately hooked for good. Then and there the idea was born, to one day record with great jazz contemporaries in a studio in New York. Alas, twenty years later in the summer of 2017, Marziali finally gathers together some of the most talented musicians of his generation and records an album of personal original compositions.

The songs on Windows And Lights are all equipped with poignant melodic motifs which are elegantly distributed among the instruments. Colin Stranahan 's driven drum work leaves a mark on this highly dynamic affair and serves Glenn Zaleski's piano stabs well. The latter, while never in the front of the mix nor the main melodic voice, draws attention to himself with trademark syncopated chops and arpeggios. The synchronized interplay between the two is highly audible straight from the opening "Underground Tale." It becomes fast apparent, that Jonathan Kreisberg's role in this quintet is almost as important as that of the leader. His tone and phrasing has as much impact on the compositions as do the bopping saxophone lines of Marziali, without stealing the show. The two of them share obligations in this set of tunes in a most harmonious fashion and constantly alternate soloing, demonstrating a certain cohesion and understanding for one another that shines through on every account and becomes especially apparent on quieter compositions, such as the ballad "Ancient Ruins," where the two share the spotlight over an entire 8 minute venture.

Kreisberg's obviously important impact on this recording doesn't come as a surprise and can be attributed to the fact that he was partially responsible for the selection of the side musicians. The impeccable chemistry between him and Stranahan is already on display on his last group effort Wave Upon Wave (New For Now Music) from 2014. Furthermore, it proves necessary for Kreisberg to be given much space for his voice to speak, for what he has to say is too beautiful to be restrained to narrow borders. His current part in the Lonnie Smith trio aptly proving this point of counterproductive restriction. Only a minute into "7 October" Kreisberg proves his value and refreshing input on a wild rampage into guitar/synthesizer territory.

Contrary to what might be expected from a player who'd been classically trained until their 18th birthday, Marziali's compositions and saxophone lines are all jazz and incorporate very few tendencies toward classical music. Everything here seems to come naturally to him, from the structure of the compositions to the exact moments he chooses to step in and deliver sophisticated and supple saxophone phrases—making for a refreshingly balanced record. Windows And Lights sucks the listener into an exhilerating one hour session of post-bop and modern Jazz that remains rich in variety throughout.