BY WOODROW WILKINS
October 25, 2005
Sign in to view read count 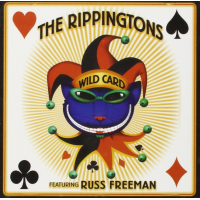 Longevity is perhaps the truest sign that an artist, or group, is doing something right. After nearly two decades and some sixteen albums, The Rippingtons keep rolling. Their latest venture, Wild Card, is proof that the current lineup is the best. In their early years, The Rippingtons consisted mainly of Freeman on guitars, keyboards, and programming; varying sidemen, including Jeff Kashiwa and Mark Portmann; and such studio guests as saxophonists Kenny G, Brandon Fields, Kirk Whalum, Paul Taylor, and Eric Marienthal.

In recent years, however, the group has stabilized. Along with Russ Freeman and bassist Kim Stone, the regular lineup consists of Bill Heller, keyboards; Dave Karasony, drums; and Scott Breadman, percussion. Although Taylor recently performed with the group in concert, it's Marienthal who has become an honorary Rippington, having toured regularly with the group for the last several years and playing as a featured saxophonist on 2003's Let It Ripp and now on Wild Card. Backed on several tracks by trumpeters Jerry Hey and Gary Grant and trombonist Bill Reichenbach, The Rippingtons literally let it rip.

Cuban diva Albita provides the lead vocal on the spicy "El Vacilon, a high-energy track that features Breadman and Karasony, with Freeman on acoustic guitar. Willy Chirino, composer and performer of theme songs for Spanish-language soap operas, joins the ensemble on "Mulata de Mi Amor, a charming, danceable selection that again brings forth the percussion/drums duo of Breadman and Karasony, backed by the horns. On the laid back "Moonlight, Freeman takes point on electric guitar. The song also features solos by Heller and Marienthal. Stone's bass, while not dominant, is very effective throughout.

Although Freeman is the bandleader, he is a sideman on some songs, while Marienthal is out front. When the guitarist does take the spotlight, he sizzles. This is especially true on the closer, "In the End. If you're not careful, you might think you're listening to Carlos Santana, Jimi Hendrix, or Larry Carlton when Freeman gets cranked up. Wild Card starts a bit slowly, but by the third track, "El Vacilon, the album takes off and never really lets up. Taken as a whole, it's at least as good as Life in the Tropics and Let It Ripp. However, depending on your mood, it may be even better.

Visit The Rippingtons on the web.