Sleeping in Vilna: Why Waste Time

By EYAL HAREUVENI
October 23, 2012
Sign in to view read count 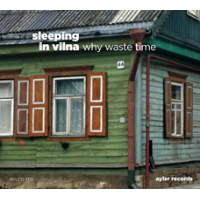 This transnational quartet blends poetry with intriguing, all-improvised sonic textures. On the poetry side are vocalist and hip-hop artist Mike Ladd, who worked with pianist Vijay Iyer on the staged projects In What Language and Still Life with Commentator (Pi, 2004 and 2007), and clarinetist Carol Robinson, who has recorded music from such experimental composers as Giacinto Scelsi, Morton Feldman and Luigi Nono. Ladd also employs vintage synthesizers, while Robinson contributes spoken words. Drummer Dirk Rothbrust, who plays mainly new music, and guitarist David Randall, who has recorded with popular acts including Faithless and singer Neneh Cherry, flesh out the quartet.

The 13 short poems and musical musings sketch a new and adventurous manner of presenting poetry with live improvisation. There are some sonic references to the spoken word plays of Laurie Anderson, and to the cinematic soundscapes of guitarist Ry Cooder—even to nervous guitar-drums duos such as Mary Halvorson and Weasel Walter's Opulence (ugEXPLODE, 2008)—but this quartet is already demonstrating a strong, independent voice on its first project.

ADVERTISEMENT
Ladd is gifted with a charismatic presence and suggestive delivery that covers a spectrum of moods and feelings. He transforms George Clinton 's "Odd Soul" into a metaphysical haiku: "what is soul?, i don't know, soul is chicken fu-young." On the restless "Entropy," he angrily criticizes the consumer-led Western society when he recites: "guns and toys, watching mass murder my escape of choice." Ladd adopts a painful, sarcastic tone on the chaotic improvisation "In a Name" and charms on the emotional "Oh Honey."

The quartet's musical palette is always surprising. Robinson and Randall set a spare, evocative atmosphere for Ladd, reminiscent of innocent childhood, on "Angels Crazy." "Past Chaser" is the only track where the entire quartet explodes in a fiery improvisation— Robinson adding screams, Rothbrust mercilessly hitting his drum set, Randall playing with effects and Ladd reading his anti-war poem. "Marvelling," on the other hand, is a touching love poem, with Robinson as vocalist. Randall's experimentation with effects is the backbone of the poetic musing, "Drenched In Us," while Robinson's clarinet encompasses "Steppe Together" in a modern chamber setting.

Inspiring, unexpected and full of poetic and sonic wonders.

Let Nobody; Million Knots; Odd Soul; Entropy; Angels Crazy (To Our Brother In Seattle); Why Waste Time; Past Chaser; Marvelling; Drenched in Us; The Chew Voices; Steppe Together; In a Name; Oh Honey.

About Sleeping in Vilna