Home » Jazz Articles » Andile Yenana: Who's Got the Map?

By Seton Hawkins
October 23, 2005
Sign in to view read count 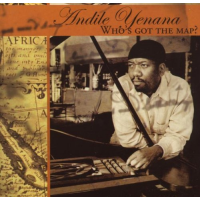 The odd title of pianist Andile Yenana's second album as a leader, as he writes, "depicts the space I am in—call it my voice, expression, interpretation of a reality transformed into compositions." While that's a mouthful, the album succeeds in this respect.

A disheartening trend in some South African jazz is a common desire to fashion a "global village" sound: so many styles are referenced and used that the result becomes impersonal. Yenana never succumbs to such problems. His roots are always evident—his comping evokes McCoy Tyner; his compositions show the influence of John Coltrane, Thelonious Monk, and Abdullah Ibrahim; and his solos often recall the simple, lyrical beauty of another great South African pianist, Pat Matshikiza. However, as he amply demonstrates on this album, Yenana is more than the sum of his influences. While he may stretch his horizons and try new styles, the album is unmistakably in his own voice, and it boasts a rare coherence in form and style.

While every piece on this album is excellent, several stand out. "South Central" and "Pillar to Post" are gorgeous solo piano outings in which Yenana showcases his singing melodic lines and his subtle, shifting harmonies, even exploring new timbres by strumming directly on the piano strings. "Mr. Harris" is a greasy funk outing that highlights the trumpet work of Sydney Mavudla, whose slurry, note-bending, relaxed sound is pitch-perfect. Finally, "Sydney's Etude 2," composed by the album's saxophonist, Sydney Mnisi, is the sort of track that John Coltrane would have recorded had he been South African. Mnisi's hard metallic tone, restless solos, and saxophone cries speak strongly of Coltrane's influence.

Particular praise must be given to the album's drummers, Clement Benny ("Pedal Point" and "Mr. Harris") and Morabo Morojele (all other tracks). They lay down dense, driving beats that literally blast Yenana's music forward. The combination of this drumming with Yenana's free-flowing comping and the horns entering and exiting on weak beats endows a rhythmic flexibility to the tracks that is at times jarring, but highly impressive.

Given Yenana's past work—e.g., his recordings with Zim Ngqawana and his own 2002 debut, We Used to Dance—Who's Got the Map? has a lot to live up to. However, Yenana is not one for complacency, and his restless exploration of his musical vision has resulted in one of 2005's best albums.