Janet Staley: Whisper to the Wind 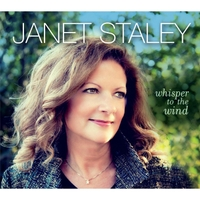 Janet Staley is an artist who immediately appeals to listeners for her great personality and for her personal approach to songwriting and performing. Her new release, Whisper to the Wind, is a vivid example of the hard work and passion that fuels her creative vision.

The album features 11 stunning tracks that offer really great melodies, a crisp and elegant production, and more importantly, a smooth vocal flow that fully showcases Staley's incredible vocal prowess and performance skills. As a versatile and charismatic singer, Staley truly has the ability to interpret songs in ways that are catchy, direct, and easy to relate to. On songs such as a cover of the Carpenters' "Superstar," one of the album's highlights, Staley offers a striking performance with a retro taste and flavorful arrangement.

The opening number, "The Nearness Of You," begins with a touching string session that makes me think of Tom Waits' "Somewhere." On the other hand, while Waits' tune is brought to life through an intense string arrangement and the singer's gravelly voice, Staley counteracts with a smooth, classy and soft-spoken vocal tone with a lot of warmth.

Whisper to the Wind is ultimately a classy, engaging and sophisticated record with jazz overtones and a veiled hint of pop appeal that still retains a lot of elegance.

Nearness of You; Can't Help Lovin' That Man; Medley: Blackbird/In My Life; When October Goes; Everything; Till There Was You; Here's To Life; More Than You Know; Superstar; Garden in the Rain; Willow Weep for Me.