By Tyran Grillo
February 23, 2018
Sign in to view read count 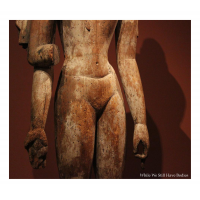 While We Still Have Bodies names the collaboration of trombonist Ben Gerstein, bassist Sean Ali, saxophonist Michael Foster, and percussionist Flin van Hemmen. The more one listens to their spontaneous creations, however, the less important such roster division becomes, receding in deference to forces without proper name. To achieve such effect is no small task, for it requires a selflessness that can only come from musicians who understand themselves.

In this hour-long free improvisation consisting of tape collages, lo-fi electronics, and acoustic instruments, we encounter far more than any such description could express. The overall effect is born of specific impulses, each more integrated than the last, until the sounds coalesce, golem-like, into a living organism. Said organism absorbs agency from its surroundings in microscopic amounts until its entire body is self-sufficient and ready to crawl. Over time, it stands upright, conveys its intentions through gesture, and, in a way, speaks. Its songs range from tactile onslaughts of cellular information to drone-like textures of divination. At any given moment, there is something to give us purchase, as if we are standing in the middle of an environment that never sleeps, and of which we are being granted merest glimpses.

As one settles in, sources become apparent: an aggressively bowed double bass, the tinkling of metallic percussion, the fuzzy grammar of a distorted guitar, an overblown reed, a breathy trombone. Yet these morphemes follow more than dictate any sort of grand design, content to blend humbly into the collective woodwork. The result is music that develops in an uncannily psychoanalytical fashion, seeming to bore into the depths of childhood traumas as a means of dissolving their poisons. Thus, when familiar elements—interview clips and other soundbites—bob to the surface, they feel torn from the archives of a repressed past. Our role as listeners, then, becomes not to pick apart individual elements like sonic detectives but to offer ourselves as objects of investigation. The densest sections therefore come across not as burials but as exhumations, while quieter passages bleed, all-consuming in their reflective power. Field recordings present the most confrontational moments, as if asserting the continuity of nature over the ephemerality of those flitting through its confines in so-called lives.

None of this is meant to imply that the music is in any way dark or cynical. Only that, as masterful as it is, it is not about mastery at all, but points rather to the unnamed musician in the room: creativity itself. It's as if everything we hear in this context were an inevitability that already has a voice, one that would carry on even without our bodies to amplify it. The result is an exercise in humility that pulls us into its gravitational vortex without discrimination. Because all of us are equal when physics rule the day.

About While We Still Have Bodies