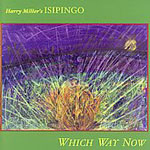 Harry Miller remains one of the unsung heroes of modern improvised music. A white, Jewish South African expatriate, Miller played a pivotal role on the '70s European jazz scene, co-founding the Ogun label and promoting the documentation and popularization of multicultural, African-inflected improvisation. He was also, however, a brilliant, powerful bassist who bedded a number of classic recordings, as well as a notable, if sparsely recorded, bandleader and composer.

Isipingo was one of Miller's finest bands, and Which Way Now showcases an early incarnation of the ensemble which was previously undocumented on any official release. The group's only other album—Family Affair, recently reissued on Ogun's three-CD Miller boxed set—was recorded two years after this Bremen radio broadcast and featured slightly different personnel. This earlier lineup is loose, tough and somewhat rough around the edges, but it compensates for its coarseness with enthusiasm and sheer combustibility.

Miller's presence directs—but does not dominate—the proceedings. The leader's compositions are open-ended and flexible, and, although less memorable than much of the kwela-inspired repertoire of this idiom, certainly fine for blowing. The team of Miller, Keith Tippett and Louis Moholo-Moholo provides a dynamic, responsive pulse, shifting tempos and rhythmic texture with an impressive balance of precision and spontaneity. Mike Osborne and Nick Evans register fine statements, the former molten and declarative, the latter dense but delightfully agile. Particularly remarkable is Mongezi Feza, whose slashing, acidic lines afford the catalyzing presence in the ensemble; here is the cry of South Africa, plangent and weirdly lyrical. It is a rare pleasure to hear the band rippling behind the trumpeter, Miller's voluminous tone shuddering hot into the microphone.

It is largely to the leader's credit that the sounds of Feza and other expatriates are not lost to the ether, captured forever in these recordings, even now surfacing. As Which Way Now shows, however, Miller was far more than merely background noise—he gave the music flight, and he did it with his own wings.