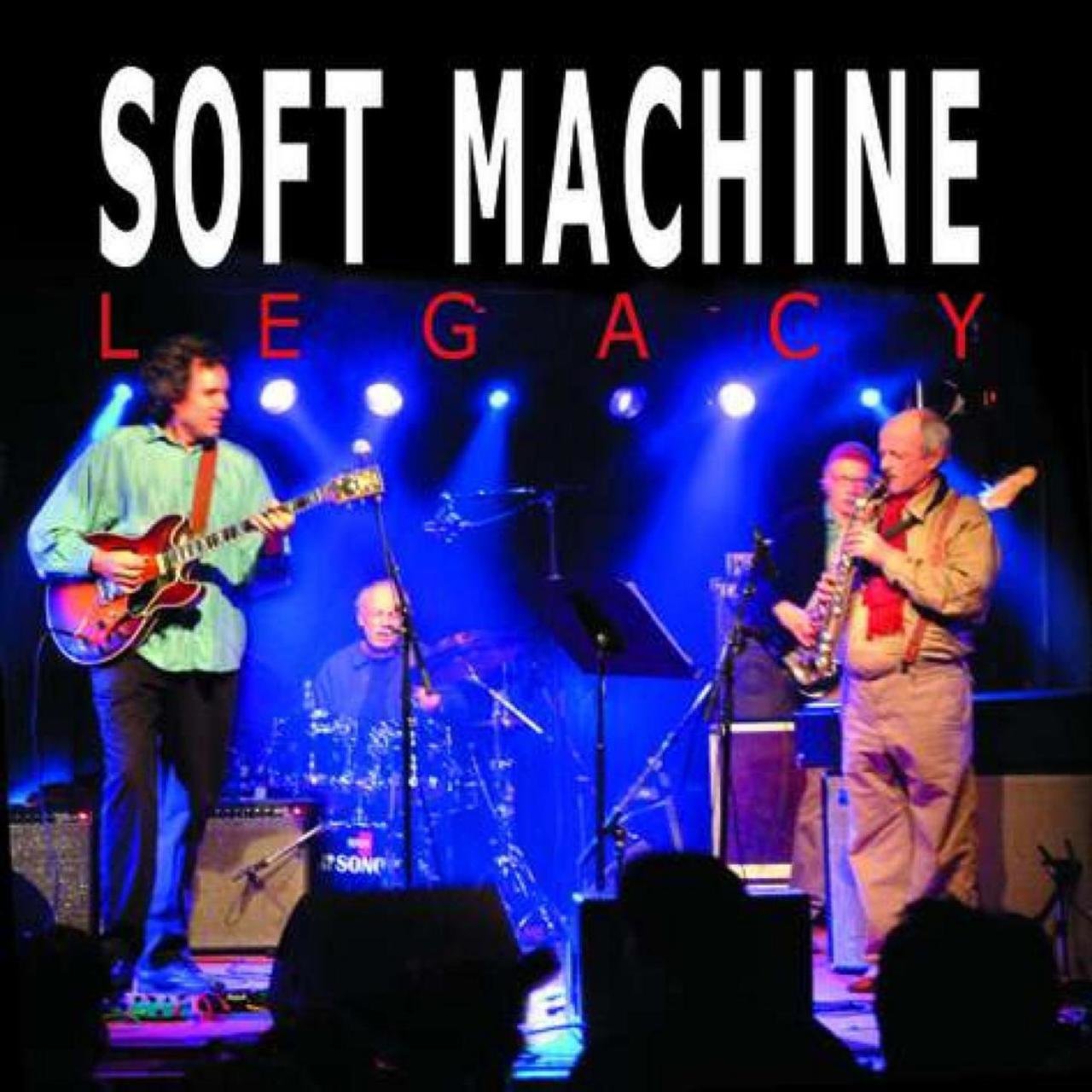 Some would argue that Soft Machine didn't technically take its last wheezing gasps until the early 1980s, with the release of the largely inconsistent Land of Cockayne (EMI, 1981). Most, however, would agree that the seminal British jazz/rock group's last proper release was Alive and Well—Recorded in Paris, the first album where not a single member remained from the group that originally began as a Dadaist psychedelic band in 1966, emerging from the ashes of the Wilde Flowers.

Virtually every Soft Machine album released during its existence was an evolution from the ones that came before—with the possible exception of the period from Bundles (Harvest, 1975) through Alive and Well (Harvest, 1978), where they became a largely guitar-centric fusion band, first with the soon-to-be-legendary Allan Holdsworth and then the perennially underrated John Etheridge. But there was a certain spirit, a feeling that anything was possible that permeated the band throughout the majority of its existence.

There are those who are fans of the early song-based days of The Soft Machine (Probe, 1968) and Volume Two (Probe, 1969), and those who preferred the aforementioned guitar-driven period from 1975 to 1978 when the group was largely spearheaded by keyboardist/saxophonist Karl Jenkins (who also wrote the lion's share of the material) and drummer John Marshall. But the general consensus is that keyboardist Mike Ratledge, bassist Hugh Hopper, saxophonist/occasional pianist Elton Dean and drummer/singer Robert Wyatt, who recorded—with and without the assistance of occasional guests—the now-classic Third (Columbia, 1970) and the even more challenging Fourth (Columbia, 1971), were the "classic lineup.

Marshall joined the band for the second half of Fifth (Columbia, 1972), and so had the opportunity—albeit briefly, to play with both Hopper and Dean. But by the time Etheridge joined the band in 1975 to replace Holdsworth—who had departed with virtually no notice to join drummer Tony Williams' New Lifetime band—only Ratledge remained, and in a significantly diminished role.

Ratledge would ultimately disappear from the music scene entirely, while Wyatt—paralyzed from the waist down due to an unfortunate accident, would continue on to fashion a highly-lauded career as a singer/songwriter on albums including Rock Bottom (Virgin, 1974) and Cuckooland (Hannibal, 2003). Hopper and Dean, while building their own divergent discographies—Hopper being generally more concerned with form and Dean with total freedom—worked together often in the ensuing years, in projects that didn't so much exploit the Soft Machine name as it did the improvisational spirit of the group, ranging from Soft Head and Soft Heap in the '70s to the more recent Soft Bounds. Each group had its own complexion, but each capitalized on the artistic tension between Hopper and Dean's natural dispositions. Hopper was certainly more than capable of playing free and Dean had no difficulties working with form, but it was when the two got together that the real magic occurred.

So when Moonjune Records' Leonardo Pavkovic approached Hopper, Dean, Marshall and Holdworth to create a new group based around the jazz/rock spirit of Soft Machine in 2002, the result was Soft Works. But while the resulting album, Abracadabra (Moonjune, 2003) had its moments, Holdsworth's perfectionist tendencies—and the fact that he mixed the album on his own—sucked much of the life out of what should have and could have been a truly remarkable band—as was born out by their live performances. There's a live album in the can at this point, but whether or not it will ever be released is still uncertain.

With Holdsworth living in the US and the rest of the band in Europe, matters were further complicated. So, in a repeat of 1975, Etheridge was recruited to replace Holdsworth, and the band's name was changed to Soft Machine Legacy. The group's first release—last year's Live in Zaandam (Moonjune, 2005)—was a strong outing that demonstrated more fire than Soft Works, despite it being a recording from one of the group's earliest shows.

The imminent release of the band's first studio album, The Soft Machine Legacy (Moonjune, 2006) is a bittersweet accomplishment. Here's a band that finally appears to have the momentum to be an ongoing concern—two records with the identical line-up was unheard of in the original Soft Machine. But tragically, Dean passed away in February, 2006, only two months after a series of dates that have culminated in the DVD release, New Morning—The Paris Concert. But both the CD—to be released in the US in August—and the DVD are, at least, fitting tributes to Dean—an artist who, like the rest of Soft Machine's many alumni, has maintained more of a cult following than any kind of large-scale success.

But what exactly does Soft Machine Legacy mean? Even when the original band became guitar-centric in the mid-1970s, keyboards were a large part of the overall sound, and while Dean plays the occasional Fender Rhodes with both Soft Works and Soft Machine Legacy, the complexion of the band bears little, if any, resemblance to the Soft Machine of old. But what is clear is that Soft Machine Legacy is about improvisation in an electric context—a sentiment echoed by Etheridge in the twenty-minute interview segment that's a welcome bonus feature on the DVD.

The bonus interview footage is revealing, as every member of the band reflects on what it was like to be in Soft Machine and, ultimately, what it has meant to their careers and the formation of Soft Machine Legacy.

But it's the concert footage that's the meat of the DVD, and while Soft Machine Legacy revisits the occasional song from the Soft Machine repertoire—in the case of New Morning a version of Hopper's brooding "Kings & Queens from Fourth and a reworked version of "As If" from Five retitled "Has Riff," based on the song's main riff but minus the main theme—it bears little resemblance to the texture or approach of the original. This is no tribute band. The material is a mix of post-Softs material by band members—Dean's riff-based 7/4 "Seven for Lee has been recorded a number of times under titles close to, but not always exactly the same, as the one used here. Etheridge contributes "Kite Runner, the most overtly rocking song of the set, as well as the gentler, more lyrical encore, "Strange Comfort.

For fans of any one of these players the DVD is essential; for those who have followed more than one, it's like manna from heaven. Dean alternates between his slightly curved cousin to the soprano sax, the saxello, alto saxophone and Fender Rhodes. What's perhaps most remarkable about Dean's performance is how he is able to bring an almost reckless abandon to even the most structured of songs. The majority of the material on New Morning is based on heads that open up into more open-ended soloing over leading vamps, but Dean's ears—along with the rest of the group's—are big indeed, and while some of the vamps presented would become boring in the hands of lesser players, Soft Machine Legacy keeps things consistently interesting throughout.

Hopper is the solid rock that keeps things focused, although he occasional leaps to the forefront with his signature fuzz tone. Marshall—perhaps the most versatile member of the quartet, having gone on to play on more rarefied ECM recordings with artists including Norwegian bassist Arild Andersen, Greek pianist Vassilis Tsaboropoulos and German bassist Eberhard Weber—remains a remarkable force of nature. Fluid, powerful and liberal, he's still capable of laying down a strong backbeat when required, as he does on Etheridge's "Ash and "Kite Runner. But equally he's loose and responsive throughout.

The biggest surprise is Etheridge, if only because, after his brief tenure with Softs, he tended to fall off the radar at an international level. He's hardly been silent, however, releasing albums that range from his fusion band with violinist Ric Sanders to his Zappatistas group, which puts its own spin on the music of Frank Zappa, and his remarkable solo record, I Didn't Know (Dyad, 2004). Holdsworth may have gone on to greater acclaim as a truly groundbreaking guitarist, but in the final analysis what Etheridge brings to the table is a more cosmopolitan style that incorporates a more recognizable jazz-centricity, imaginative use of effects including Frisell-like looping and a lithe and rapid-fire capability that is certainly the equal of Holdsworth. Most importantly though, what he brings to Soft Machine Legacy that makes it altogether more satisfying than Soft Works is an energy that demonstrates he's not averse to taking risks.

It's this avoidance of playing it safe that makes Soft Machine Legacy's nearly two-hour performance so engrossing. Mistakes are made—there are moments where Etheridge seems to lose sight of the time. But jazz—even the jazz/rock variety—should be about risk, and while Etheridge doesn't have the same recognition factor as Holdsworth, as revolutionary as Holdsworth has become, Etheridge has evolved into a far more exciting and visceral player.

With Etheridge the youngest of the bunch at 58, the other thing that's clear about Soft Machine Legacy is that time has not diminished the players' ability to kick some serious butt, though they're seasoned enough to know that dynamics are what carry a show, and New Morning traverses considerable territory.

Beautifully recorded from both an audio and video standpoint, New Morning would be a significant release for fans of any Soft Machine incarnation. That these four players never actually played together as a unit in the day is irrelevant. Each one came to Soft Machine with a different background that ultimately contributed to a group that seemed to evolve in giant leaps with each record. But with Dean's untimely passing at the age of 60, this DVD—and the studio release to follow—become even more important. Soft Machine Legacy has continued on, with the equally inimitable Theo Travis stepping into Dean's very big shoes. But it will undoubtedly be a different band without Dean's free jazz tendencies creating the very tension that Etheridge alludes to in the interview footage as being almost fundamental to a band's creative potential.

New Morning—The Paris Concert is a show where everyone was clearly having a lot of fun but, more importantly—and with a collective sound that had little to do with the texture of any original Soft Machine incarnation—it is a performance that demonstrates that a few grey hairs (and more than a few shed hairs) needn't diminish one's ability to take the rock-infused improvisational spirit of their youth and evolve it into something that's reverent but nothing short of completely contemporary and innovative.