Denny Zeitlin: Wherever You Are--Midnight Moods for Solo Piano 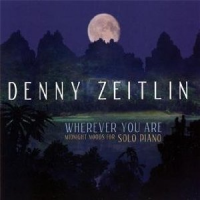 There's something magnificent about a top-level artist alone with a piano, immersed in a mood of quiet nights, under quiet stars. Denny Zeitlin, a versatile music maker who wrote the electro-acoustic symphonic soundtrack for the 1978 remake of the science fiction classic Invasion of the Body Snatchers, has released a handful of excellent trio albums on the MaxJazz and Sunnyside labels, but since 2010, has concentrated on solo perforomances.

On previous albums, Zeitlin has always included varied programs, with Midnight Moods though, he tries a different tangent—a thematic album. Featuring a sustained mood, dealing in gentle ballads with the kind of extended ruminative atmosphere that Frank Sinatra pioneered with his In the Wee Small Hours (Columbia Records, 1955).

The tunes are familiar standards, some bossa-nova and a couple of classic Zeitlin originals. Opening with the often covered "Body and Soul," from the 1930 Broadway review Three's a Crowd, and brought irretrievably into the jazz cannon by saxophonist Coleman Hawkins' 1939 take on the tune. Zeitlin reharmonizes and injects a stately atmosphere, his exquisite touch and early classical background shining through.

Gordon Jenkins' "Good-bye" was covered beautifully in the jazz piano arena by Keith Jarrett and Bobo Stenson, and here Zeiltin explores the fragility of the tune through use of rubato, sounding as if he's feeling his way into uncharted territory. Antonio Carlos Jobim's most beautiful of works, "Quiet Nights of Quiet Stars" transitions into "How Insensitive," then slips back and forth between the two tunes.

Zeitlin also revisits two of his most cherished originals, "Time Remembers One Time Once," from his 1983 ECM Records album of the same name—a beautiful duet recording with bassist Charlie Haden—and "Wherever You Are." The former evoking the feeling of the universal search for human connection while the latter is a tender description of love's transcendence.

Wherever You Are—Midnight Moods for Solo Piano is Denny Zeitlin's most intimate and contemplative sets of songs, and perhaps the loveliest work from a top jazz pianist at the height of his expressive powers.

Body and Soul; Good-Bye; Queit Nights of Quiet Stars/How Insensitive; Last Night When We Were Young; I Hear a Rhapsody; Time remebers One Time Once; The Meaning of the Blues; My Dream is Yours; You Don't Know What Love Is; Wherever You Are.