Jeff Hackworth: Where the Blue Begins 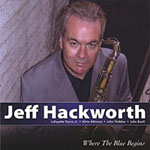 Tenor saxophonist Jeff Hackworth is back. This time he has chosen to dwell on 10 pop tunes. On his previous CD, How Little We Know (Big Bridge Music, 2007), he brought to the fore his fluent sense of style and development. He shows that once again on Where the Blue Begins, as he gives the songs their integral melodic due and then turns them into pleasant little experiences.

Hackworth has a firm grip on emotion and never lets a song descend into pap. His natural sense of swing runs a balmy air through several of the selections. However, when it comes to Elvis Presley’s “Can’t Help Falling In Love,” Hackworth has a becoming take on the indelible classic. He sways in with deep phrases, letting the redolent melody rise, and then switches the rhythm to a bossa. It’s done very nicely indeed, and the tune breathes freely of the new idiom. Jazz harmony is present in the development, and Hackworth knows just how to make that perceptible.

At first, “One Mint Julep” is pure funk. The beat is buoyant, Hackworth revels in the music, and then as he likes to do, makes a switch. Then it’s time for some earthy swing, and the band fires it up with Lafayette Harris Jr. on piano and John Basili on guitar adding juicy runs. This certainly is top-notch.

Hackworth is at ease in any tempo, and he mixes the tunes for maximum impact. He closes out with another strong effort in the beautiful ballad “Stairway to the Stars.” His pacing is articulate and deliberate, and he invests just the right sentiment. Some fine brushwork from Alvin Atkinson adds to the appeal.

Pop music has had its votaries among jazz musicians. Turning them into jazz tunes, even in a contemporary styling has not always been successful. Hackworth proves otherwise.

Can’t Help Falling in Love; Love Is a Many Splendored Thing; What Will I Tell My Heart; Just a Sittin’ and a Rockin’; Just One More Chance; Stranger in Paradise; Oh, You Crazy Moon; One Mint Julep; Then I’ll be tired of You; Stairway to the Stars.