Don Cherry: Where Is Brooklyn? 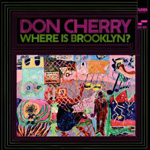 With the reissue of Where Is Brooklyn?, Blue Note completes a trilogy of Don Cherry releases (also including Complete Communion and Symphony for Improvisers) which up to now had only been available on CD in a limited edition Mosaic box set. Cherry initially came into wide prominence in jazz as a member of Ornette Coleman's landmark 1959-61 quartet.

Where Is Brooklyn features bassist Henry Grimes, drummer Ed Blackwell and tenor titan Pharoah Sanders. The five selections have no themes or structures. Rather, they are filled with turbulent rhythms that allow for a surplus of free improvisation by each member of the quartet. Each composition is a blank canvas upon which each musician paints his own picture. Cherry and and a 26-year-old Sanders continually play off each other, taking the music further out, painting scenes of clashing bright reds and greens. The best is the seventeen-minute closer, "Unite," with its stormy, explosive playing, allowing each musician to stretch out more than the album's other shorter compositions.

Where Is Brooklyn? can be challenging music. There are no melodies or toe-tapping beats. The playing is in-your-face, take-no-prisoners stuff. While certainly not an easy listen, it is still rewarding due to the heartfelt playing. Remastered in crisp and clear 24-bit resolution, the sound quality is excellent. For jazz fans curious about the avant-garde, the challenging music on Where Is Brooklyn? is as fine a place to start.

Awake Nu; Taste Maker; Thing; There is the Bomb; Unite.