By IAN PATTERSON
January 27, 2012
Sign in to view read count 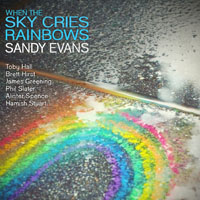 The multifaceted Sandy Evans is often described as one of Australia's finest jazz musicians and composers. True enough, but as When the Sky Cries Rainbows amply demonstrates, this saxophonist surely ranks as one of the best contemporary jazz composers/musicians anywhere. A musical response to her husband, clarinetist Tony Gorman's multiple sclerosis, this sixty-minute, suite-like work conveys a remarkable range of colors and textures, and a breadth of musical ideas that evokes composers Duke Ellington and Gil Evans in the more impressionistic segments, and modernists like bassist Dave Holland and alto saxophonist Steve Coleman in the swinging, tightly knit post-bop and knottier episodes.

The title track is a dynamic nine minutes of fluidly shifting patterns. Trumpeter Phil Slater, trombonist James Greening and Evans' soprano weave dense harmonies which blend as one, yet whose individual colors—like a rainbow's bands—gradually gain in definition. Bassist Brett Hirst and drummer Toby Hall provide a sophisticated rhythmic platform from which Evans, pianist Alister Spence and Slater launch telling solos. The three-part harmonies converge again, serene yet powerful, and carry the composition out over a dramatic bass and piano riff. It's a mightily impressive opener, and its mixture of careful architecture and inherent freedom rather nicely sets the tone for all that follows.

Evans' arrangements vary greatly and maximize the possible combinations of the six musicians. Lone trumpet features on "Spectre," an atmospheric, blue reveille; "Indigo Blue"—an intimate duet with long-time collaborator Spence—is a beautiful, John Coltrane/McCoy Tyner-influenced affair, with a wonderfully commanding tenor solo from Evans, confident and poised. Evans sits out the trio piece, "Indra Slays the Demon Serpent," a short but vibrant trombone showcase. Greening's muted trombone is protagonist of the churning "Alexander's Dark Band," growling an exceedingly catchy motif in sync with bowed bass. Trumpet, tenor and trombone chatter together a little drunkenly before the trombone and bass motif returns, with sax and trumpet dovetailing on the flanks.

There are three radically different quartet numbers: the drummer-less "Chromatic Dispersion" sounds like a Gil Evans score for an unsettling film noir scene; the post-bop "Violet" is a classic, tenor-led piece in the swinging vein of tenor player Ernie Watts; and the slightly morose "Broken" is a lament, with trumpet emitting pained cries. Two quintet pieces also provide stark contrast: "Spectre of the Broken" is a notable, moody vignette with trumpet and tenor inseparable, following a forceful melodic line over a funereal bass; and "Heedrum-Hodrum Headbanging" goes from jumpy, minimalist patterns that interlock, to gritty riffs before morphing into unreserved free jazz.

"40 Degrees" is a rousing hard-bop workout of few surprises but charged soloing. There's a celebratory South African Township air about "Hand in Hand," with beautiful, concise statements from the lead voices. An irresistible bass ostinato drives the rhythmically strong "With the Sun Behind Me," Evans again delivering a stirring and impassioned tenor solo.

Without rain there's no rainbow, and without pain there's no yardstick for love. When the Sky Cries Rainbows is a sublime personal statement, tinged by introspection and pain but ultimately vital, triumphant and inspired.