Kenny Kotwitz & the L.A. Jazz Quintet: When Lights Are Low 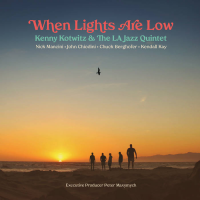 Imagine the following conversation: "Hi, my name is Kenny Kotwitz. I'm an accordionist and I want to record a centennial tribute to Art Van Damme. Would you care to join me?" Okay, it probably didn't go down quite like that but the premise, in these days of rap, heavy metal, acid rock, new wave, bubblegum pop, crass and outrageous behavior and whatever else it takes to incite the music market, is no less improbable. Braving the odds, not only did Kotwitz persuade four musicians to take part in the enterprise, he recruited four proven masters—guitarist John Chiodini, vibraphonist Nick Mancini, bassist Chuck Berghofer and drummer Kendall Kay—to team up with him and comprise the L.A. Jazz Quintet.

Together, they reanimate a quintet whose popularity for many years was undeniable but whose connection to jazz was tenuous. This is by and large "easy listening" music—highly polished, gentle on the ear and akin to the sounds one might hear in, say, an elevator, to use the most widely familiar term for it. There are a dozen numbers (and a reprise of the title song), every one of which was lifted straight from the Great American Songbook. Van Damme, whose ensemble was inspired by the George Shearing Quintet, with his accordion replacing Shearing's piano, recorded the first of his many well-received albums in 1950. Van Damme continued performing almost to the end of his life, in February 2010 at age eighty-nine. Among his few students was none other than Kenny Kotwitz who helps repay that debt on When Lights Are Low.

Even though everyone in the L.A Jazz Quintet is an accomplished soloist, there are precious few ad libs here; everyone seems content to let the melodies speak for themselves, not a displeasing plan when the composers include Hoagy Carmichael, Jimmy van Heusen, Rodgers and Hart, Duke Ellington and Benny Carter, among others. As an album of mellow, laid-back music that won't ruffle anyone's feathers, When Lights Are Low has much to recommend it; as a session whose jazz framework is perceptible, almost nothing at all.

When Lights Are Low; Skylark; Cry Me a River; Estate; When Sunny Gets Blue; Crazy She Calls Me; Darn That Dream; Harlem Nocturne; Manhattan; Mood Indigo; Polka Dots and Moonbeams; Stairway to the Stars; When Lights Are Low (reprise).