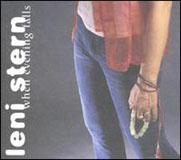 Guitarist and singer Leni Stern, an observant and sensitive world citizen, has drawn on her fascinating experiences for When Evening Falls , a musical journey that traverses the globe to examine an eclectic range of emotions and themes. The soul and heart of the Munich-born artist wends through Kenya, India, Louisiana, Palestine, and the East Village, infusing her poignant songs with world music influences and textures.

The delightful "Ice Cold Water $1" is a humorous peek into a day in the life of a New Orleans street vendor sung over a playful groove. A flock of birds serves as a metaphor for love and freedom on the tender "Let Me Fly." "Oje Mama" was inspired by an African folk tale and features Stern's flamenco-flavored guitar licks. "On the Outside" is straight-up funk with great support by Stevie Wonder alumnus Bob Malach on tenor, organist George Whitty and drummer Keith Carlock. "House On A Hill" recalls a trip to India (the "O hey O hey" chant here echoes the one on "Oje Mama"); the kind of music that influenced this tune is nearly extinct, so Stern reconstructs it as an act of preservation.

"When Evening Falls" is a simple yet effective plea for peace and Stern confronts the self-deception of drug addiction on "Dancin' With the Devil," singing in a languid voice that underscores its message. She even features a standard, "I'll Be Seeing You," which she interprets with so much flair that it doesn't sound gimmicky or misplaced. Stern retreats to the background on the incantory "Abke Hum Bichede," another song influenced by her Indian sojourns. Stern's vocal teacher, Dhanashree Pandit Rai, sings in Hindi while Stern plays reverently behind her.

Stern's voice has a pleasant languor which is occasionally accented with a kind of seductive smokiness. Just as the aroma of wine can have various components, Stern's voice suggests the similar yet diverse styles of Rickie Lee Jones, Stevie Nicks and Macy Gray. This gives her voice a flexibility which is the perfect complement for the stories she tells on When Evening Falls, for it can convey supplication, triumph or the resignation and world weariness which is sometimes the burden of experience.

Calling; Ice Cold Water $1; Let Me Fly; Oje Mama; On the Outside; House On a Hill; When Evening Falls; Dancin' With the Devil; I'll Be Seeing You; Abke Hum Bichede.