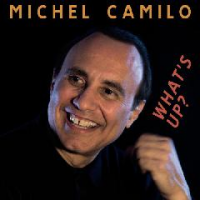 Jazz piano virtuoso Michel Camilo is known for his bombastic technique. For example, after a set at the Monterey Jazz Festival a couple of years ago, I stuck around and talked to the piano-tuner hired to rejuvenate the strings. He stood shaking his head in dismay after Camilo's hard driving workout, which had been a crowd-pleaser.

Camilo's What's Up takes, however, a different approach. This is his second solo effort in his nearly 30-year career, his first being Solo (Telarc, 2005).

Over the years, Camilo has recorded in most contexts: duets, trios, big bands. Solo, however, a different Camilo is revealed. As expected, he controls the total output, providing the upright bass counter line with, usually, the right hand playing melody and harmonic content, in chords or in octaves. In this context, there is a more balanced presentation, with hard-driving note flurries more at a minimum.

Camilo was a prodigy from early youth. He was born into s musical family in the Dominican Republic, and he showed an aptitude for the piano early on. At nine, he asked his parents to buy him one. But their response was to enroll him into the Elementary Music School of the National Conservatory. He learned to play in the classical style, and by 16 he was performing with the National Symphony Orchestra of the Dominican Republic.

He arrived on the international scene in 1983 when Tito Puente's pianist was unable to make a concert at the Montreal Jazz Festival. On a recommendation, and without hearing him, Puente asked Camilo to play. Later he toured with Cuban reed man Paquito D'Rivera for four years before branching out on his own.

It is followed by the moody "A Place in Time," with its classical nocturne feel. His take on Paul Desmond's "Take Five" brings in a down-home groove, keeping steady beat, ending in a cascade of notes. The CD's highlight, though, is the original "On Fire," with its allusions to Rio's Samba line celebrations during Mardi Gras. His masterful technique shows here. Let's hope eight more years don't have to pass for another solo recording of this caliber.