Michael Feinberg: Whatever Possessed Me 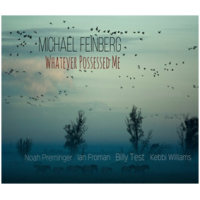 Tribute bands are glowingly appreciated by fans of great rock acts; perhaps it's time jazz fans got with it! Michael Feinberg's Whatever Possessed Me is a dedication to the works and sound of John Coltrane and his classic quartet with McCoy Tyner, Jimmy Garrison, and Elvin Jones. The performances on this album are so good, one can imagine Coltrane's ghost hovering overhead and nodding approvingly.

Feinberg has chosen some prime selections from the bop lexicon to infuse with his own arrangements, textures, colors and phrasings. Four of the nine cuts on the album were recorded live; one, "Mr. Syms" is offered in live and studio version.

The album kicks off with a live rendition of the Coltrane song "Compassion." Feinberg begins with a gentle probe, allowing plenty of space for pianist Billy Test and drummer Ian Froman to explore their instruments in tandem before Noah Preminger enters with a scorching tenor sax solo. Test's playing suggests McCoy Tyner's modal style and Preminger brings all sorts of Coltrane-like tenor sax action—from arpeggios to stops, twists and turns. The song rises in intensity and then gently fades with Feinberg's solo.

"Crescent" begins with Test's bluesy, urbane piano interlude. Feinberg and Froman enter with a steady walk, and then Preminger takes over with a yearning, sharp solo. The music sways gently. Test's intense modal solo propels the listener on a bright neon journey. The music eventually winds down to a dreamy atmosphere.

On the Thad Jones tune, "Lycra Too," Preminger multi-tracks two amazing sax lines. The primary piece is mellow blues, but Preminger experiments with some free playing before he joins the group on their blues walk.

The studio version of the Coltrane piece, "Mr. Syms," starts with a statement of the theme. Then Preminger offers a sax conversation over Feinberg's walking bass, and, as the solo evolves, he gives a master class in cool. There's Coltrane in his playing, but a pinch of Wayne Shorter's Blue Note period too. Preminger's solo is followed by Test's deep exploration of the ivories. Feinberg sets another relaxed rhythm as the piece flows and then gets into the act with a rapid solo -pinching, plucking and roving the neck of the bass. Froman follows as the song winds down, mining the trap for quick and challenging repartees. The live version is just as enthusiastic—the group cooks above Feinberg's laidback rhythm and Froman's active drumming. Preminger, Test, Feinberg and Froman perform dramatic solos that would do any NYC jazz venue proud.

On Tadd Dameron's "Whatever Possessed Me," Feinberg states the melody with the bow. In this wistful ballad, Test demonstrates a light and polished touch, blending his pedal work with Froman's brush work to great effect. The group offers a languid yet beautiful exploration of "Meditation." Then suddenly, like a mad taxi dash through urban traffic, the live version of Gene Perla's "Sweet Mama" explodes. Froman's energetic output is in the foreground and he takes the piece into the ionosphere. With the hot and challenging solos by Preminger and Feinberg, this song may be the highlight of the album.

The set concludes with a happy blues reading of Billy Eckstein's "I Want to Talk About You." The group waltzes through the number in loving fashion, the warm pastels of the composition shimmering in an aural sky.

The mix of the live versions could be improved, but that does not diminish the quality of the music. Feinberg's arrangements permit Preminger and Test to investigate the vocabularies of Coltrane and Tyner, respectively, in a free-wheeling yet controlled manner, and both musicians exhibit their talents in subtle and exhilarating ways. Add the wizardry of Froman and Feinberg, and this dedication to one of the top quartets of the jazz genre should be on top of any Coltrane fan's wish list. Recommended.