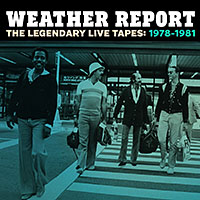 While live documents from Weather Report's 16-year run continue to be unearthed, and while live albums have previously documented the group's 1978 tour, there's been precious little from its final tours of 1980/81, when the group returned more decidedly to its jazz roots with one of the best albums in its discography, 1980's Night Passage. Only keyboardist Joe Zawinul's "Fast City" and saxophonist Wayne Shorter's "Port of Entry," for example, made it onto 2002's Live and Unreleased (Columbia). Thanks, however, to drummer/producer Peter Erskine and executive producer Tony Zawinul, The Legendary Live Tapes 1978-1981 not only rights that wrong by including live versions of Night Passage in its entirety, but expands the existing archive of live material from the 1978 tour, documented on 8:30 (Columbia, 1979), Live and Unreleased and the more recent audio and video release, Live in Offenbach 1978 (MIG, 2011).

While 8:30 was, in fact, a live/studio combo with three of its four LP sides devoted to live performances and the fourth containing four new songs recorded in the studio, not one of those four songs—Zawinul's "8:30" and "The Orphan"; Shorter's "Sightseeing"; and the Zawinul/Shorter collaboration "Brown Street"—has ever made it onto a live recording...until now. In fact, while slightly out of order, and with "The Orphan" reduced to an even shorter miniature than it was on 8:30—acting more as a connecting thread between a brightly delivered "Brown Street" and darker-hued "Forlorn" (the first appearance of a Night Passage composition)—it's the live versions of all four studio tracks that open the first of The Legendary Live Tapes 1978-1981's generous four discs, which alternate between the quartet version of Weather Report that toured in 1978 with Zawinul, Shorter, Erskine and bassist Jaco Pastorius, and the 1980/81 performances that added percussionist Robert Thomas, Jr. to the mix.

Any live document of Weather Report from that era would have to include certain numbers that were both show-stoppers and well-known tracks to even the most casual fan: the singable hit "Birdland," from Heavy Weather; the world music groove of Black Market's joyous title track; the medley of the ethnic-based "Badia" and relentlessly pulsating "Boogie Waltz," from 1975's Tale Spinnin' and 1973's game-changing Sweetnighter, respectively; the lyrical Zawinul ballad "A Remark You Made," a feature for the equally melodic Pastorius and the bassist's own mind-boggling bass-heavy "Teen Town," both also from Heavy Weather; and the deeper, more atmospheric and mysterious "Scarlet Woman," from 1974's Mysterious Traveller. Still, it's the preponderance of material that was largely not a part of previous live recordings that makes The Legendary Live Tapes 1978-1981 so special...and so essential.

There is plenty of space for solo spots from everyone; a full 41 minutes is devoted to features for Shorter, Pastorius and Erskine, along with a duo from Zawinul and Shorter that, in addition to being loosely based on the music of Duke Ellington, also features a rare spot with the normally tenor/soprano saxophonist playing alto and a demonstration of the largely synthesizer-favouring Zawinul's still-present piano prowess. But beyond that—and beyond the usual suspects that were bound to show up in any Weather Report show from the time—there's well over two hours of material that have been rarely, if ever, documented. A superb set of liner notes from Erskine provide not only a big picture overview of what it was like to be in Weather Report at the time, but a detailed, informative and revealing track-by-track commentary. Never has Weather Report been written up so well in a commercial release.

Of all the discs, the most important one may be the third, culled from 1980/81, where six of Night Passage's eight tracks take up the entire disc; on CD1, after "Forlorn," a gorgeous take of Pastorius' "Three Views of a Secret" follows, beginning as a delicate ballad before assuming its more vibrant complexion nearly half-way into its seven minute-plus runtime...and completing the eight tracks from Night Passage included in this box set.

But back to CD3: from Erskine's thunderous introduction to Zawinul's disc-opening "Fast City," it's clear that Weather Report, circa 1980/81 was a completely different band than the one that had toured just a couple years earlier. Looser, more improvisationally open, and swinging harder than it had ever done before, credit has to go to the rhythm team of Pastorius, Erskine and Thomas, who seem to be playing as if their lives depended on it. The often taciturn Shorter, too, seems to have been unleashed from his more restrained work on Mr. Gone—the Zawinul-dominated album of remarkable synthesizer orchestration that, in addition to being unfairly judged at the time but now seen for the groundbreaking record it really was, had many fans and reviewers alike suggesting that it was, indeed, Shorter who was the titular "Mr. Gone."

Zawinul, too, seems to be more unfettered...even as, with the group's final album with Pastorius, Erskine and Thomas (1982's Weather Report) would return to more through-composed and less open-ended material. But here, all the stops seem to have been pulled out as "Fast City" leads to a powerhouse solo from Erskine, where Pastorius and Zawinul add brief exclamatory phrases before the composition's still memorable melody is played at an even faster clip than on the studio album.

Beyond the relentless sound of surprise delivered by this band on every track it tackles, there are other surprises. The gradually ascending, speeding up synths that end "Forlorn" at the end of Night Passagenot a studio concoction but something Zawinul somehow manages to accomplish in real time. This was, after all, a time before samplers and the kind of sonic processing that's taken for granted in the new millennium, so what might seem like such a small thing now was a far more remarkable achievement then.

And if there were ever a question as to why Weather Report would include an Ellington tune on one of its albums, with the group performing "Rockin in Rhythm" at an even faster tempo as Zawinul moved from electronic big band synthesizer orchestrations to a brief acoustic piano solo, it made crystal clear that, as much as Weather Report was a forward-looking group, it had never lost sight of the longstanding tradition at its core. The performance recalls Erskine's description, in the liner notes to the Forecast Tomorrow (Legacy, 2006) compilation box set, of a press conference shortly after he joined the band; asked if his prior experience playing in big bands qualified him to play with Weather Report, the ever-outspoken Zawinul jumped in, responding: "Weather Report is a big band and we are a small group, too. Next question."

The Legendary Live Tapes 1978-1981 is filled with such moments, as the group expands significantly upon the studio versions in its repertoire, with the slowly building, ambling swing of Zawinul's "Madagascar" expanded to over 17 minutes, while the punctuated evolution of "Port of Entry" runs almost 13 minutes, double its original length. And while there are plenty of places where individual solos delineate, much of this music also follows the modus operandi that dates back to the group's very early days, when Zawinul said "We always solo...and never solo."

Other highlights include a medley of "Continuum," from Pastorius' 1976 leader debut, Jaco Pastorius, and the bassist's more relentlessly grooving, disco-inflected "River People," from Mr. Gone, that stretches out to over twelve minutes. A take of Black Market's "Gibraltar" is another high point that, opening with the same sounds of massive boat horns, morphs from a spacious synthesizer feature for Zawinul into an even more up-tempo burner that seems to build and build until Pastorius' rapid-fire sixteenth notes, driven by Erskine's tumultuous support, push Shorter into one of his fiercest solos of the set.

And that's only the first ten minutes of a 21-minute track that demonstrates virtually everything that was great about Weather Report in general and this incarnation in particular. While commercial success did, for a time, seem to drive the band into more fixed arrangements and less open-ended improvisation with the unexpected mega-success of Heavy Weather—a feeling that was not really countered by the previous live recordings of 8:30 and the complete concert of Live in Offenbach 1978, The Legendary Live Tapes 1978-1981 makes clear that Jaco-era Weather Report—especially with the recruitment of, first, Erskine and then, Thomas—was no less an intrepid, without-a-safety-net improvising group than it was in its earliest years.

When Weather Report first made its impact as a post-Miles electric group with the 1971 Columbia debut, Weather Report, it eschewed the more overt virtuosity of peers like Mahavishnu Orchestra, Return to Forever and Herbie Hancock's soon-to-come Headhunters group. Instead, it established itself through unfettered experimentation in sound and pulse, form and freedom, and collective free play that made it an absolutely unpredictable but always exhilarating live experience. Still, there was never any doubt about the virtuosity of its many members, as Zawinul and Shorter remained the only constants, with bass, drum and percussion seats changing, in some way, with every successive release.

But while later incarnations of the group—in particular the period when Pastorius was a member—seemed to become more predicated on overt virtuosity, it clearly still remained a group true to its origins. If any document exists from that period to support such a statement it's The Legendary Live Tapes 1978-1981: a little over four hours of some of the group's most alternatively powerful and understated, angular and lyrical, and ethereal and groove-laden music. Previous live albums have, of course, been worthy additions to the band's discography, but The Legendary Live Tapes 1978-1981 is, without a doubt, the broadest in scope and the most vigorously revelatory: quite simply, the best live album that the group has ever released. And with much of the music coming from Peter Erskine's private archives, hope springs eternal that there might be more to come.