Home » Jazz Articles » Michael Falzarano: We Are All One

Michael Falzarano: We Are All One

By Doug Collette
January 8, 2009
Sign in to view read count 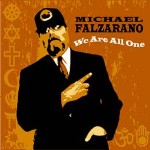 Redoubtable sideman to Bay Area notables including Hot Tuna and The New Riders of the Purple Sage, guitarist Michael Falzarano offers inspiration throughout his third CD that consolidates the talents that have proven so reliable over the years.

It's a little surprise Falzarano's aided and abetted here by a star-studded cast of musicians, 'The Extended Family' to Falzarano. Yet it's not just names that distinguish such standard fare as the easy-going shuffle of opener "Why I Love You I Can't explain." The wry good nature of the guitarist/vocalist is equally radiant on the slightly syncopated "Sweet Marie," where Melvin Seals decorates the arrangement with a prominent Hammond B-3.

In one of his final studio performances, Vassar Clements uses his fiddle to similarly embellish "It's My Own Fault" but not until Kerry Kearney, one of Falzarano's closest compatriots, effectively introduces him with a high voltage electric guitar segment. Truly, We Are All One isn't just about the guest stars: Falzarano sets the tone on a staple of the Hot Tuna repertoire, "Candy Man" elevates the authenticity and infectious high spirits through the contributions of Clements and Kearney.

The front man's amiable presence appears in tangible musicianly forms throughout the CD. Falzarano's singing turns most distinctive on the title song, which speaks to the bond of music lovers rather than any cosmic pretension. The acoustic arrangement of that tune might've been better sequenced to contrast the hard-rocking appearance of Jorma Kaukonen (Jefferson Airplane, Tuna) on "It's Just My Way," but the ominous atmosphere there remains within "New Shirt," thanks to the cryptic lyrics, which Falzarano again delivers with nuance while Buddy Cage, of New Riders of The Purple Sage distinction, decorates the tune with sounds nothing like the pedal steel he plays.

The breezy air of "To Let the Fire Die" is more effectively placed near the homestretch here, with Charlie Wolfe on harmonica and Jimmy Fleming on mandolin lightening the mood. Further bolstering the bedrock virtues of this close-knit rosters of players, the instrumental "Gonna Power Down Now" ends this fourteen cut disc, but not before "Last Train Out (In Memory of Allen Woody)," finds Garth Hudson tailoring his keyboard parts to quietly accentuate the melancholy air of the eulogy to the late Allman Brothers/Gov't Mule bassist.

The venerable keyboardist of The Band fits right in with the rest of the players here illustrating that Michael Falzarano's greatest talent may be his ability to galvanize all the participants involved here. He is crucial in erecting the united front of a genuine band, giving another meaning altogether to the title We Are All One.

Why I Love You I Can't Explain; Sweet Marie; It's My Own Fault; Candy Man; We Are All One It's Just My Way; How Long Blues; New Shirt; When There's Two There's Trouble; Crazy Days; To Let The Fire Die; We Are All One (Acoustic ); Last Train Out (In Memory of Allen Woody); Gonna Power Down Now (Instrumental).

Title: We Are All One | Year Released: 2008 | Record Label: Woodstock Records