By Edward Blanco
January 8, 2009
Sign in to view read count 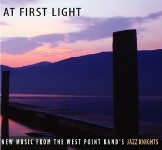 With jazz music under assault lately from the recent loss of IAJE to the demise of jazz radio stations throughout the country, it's comforting to know that jazz has many defenders everywhere. Among them are the soldier-musicians from the United States Military Academy at West Point, known as The Academy's Jazz Knights Big Band. They've launched a salvo of dazzling big band music with the self-released At First Light, an album of dynamite-packed swinging big band charts, guaranteed to clear the smoke and leave a lasting musical statement on the front lines of jazz.

In conjunction with the West Point Concert Band and the Hellcats field music unit, the Jazz Knights help fulfill the music requirements of the Military Academy and the Army at numerous functions, both at West Point and throughout the country. Led by CWO Matthew C. Morse, Associate Bandmaster, the band is comprised of professional musicians and graduates from America's finest music schools.

The music in this recording contains an arsenal of big band orchestrations, sure to make the connoisseurs of the genre take notice, for this is one power ensemble that packs a wallop. The repertoire contains original compositions and arrangements including two pieces commissioned for the band. The program however begins with the Howard Dietz/Arthur Schwartz standard "Alone Together," featuring swaggering alto lines from SSG Mike Reifenberg who also contributes two scores of his own for this album. Trombonist SSG Eric Ordway and drummer SSG Scott Drewes also weigh in with pronounced play of their own.

The Latin-shaded title piece penned by Jeff Holmes of the University of Massachusetts, is one of the center pieces of the album. Showcasing both the reeds and the very able brass section, the track highlights solos from SFC Rich Johnson on trumpet and SSG Dan Pierce on trombone. Arranged by Reifenberg, "Suo Gan," an original Welsh folk song, becomes a beautiful ballad with the support of pianist SSG Scott Arcangel and led by the spacious tenor solos from SSG David Loy Song. "Dangerous Ground" is a perky up beat blazer with razor-sharp alto expressions from composer SSG Derrick James, diced by a smooth guitar run from arranger SSG Mark Tonelli.

With the only other jazz classic on the program, the band plays with explosive force on the old time standard "Secret Love," led by Reifenberg's playful soprano romp and SSG John Castleman's bristling flugelhorn work. It's a piece well supported by the band's brass and woodwinds, promising at least ten minutes of delightful big band music. The music rounds out with the spirited Arcangel chart "The Stakeout" and ends with two Reifenberg compositions, the light "Samba for Megan" and the "not-so-standard thirteen-bar minor blues" as stated in the notes and titled "The Basilisk." Castleman proceeds to blow one mean horn which along with Reifenberg's stirring alto and drummer Drewes powerful pounding, punctuates a session of hard-driving big band orchestrations that's no less than of a world-class caliber.

Alone Together; At First Light; The Monster Brooks No Pretense; Suo Gan; Dangerous Ground; Secret Love; The Stakeout; Samba for Megan; The Basilisk.