By BRUCE LINDSAY
March 1, 2014
Sign in to view read count 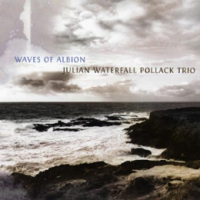 Waves Of Albion is the second album from the Julian Waterfall Pollack Trio. The musical talent and imagination displayed on the trio's debut, Infinite Playground (Junebeat Records, 2010), makes album number two an exciting prospect. The young pianist and his band mates don't disappoint.

Pollack has filled the time between albums with sideman appearances with the likes of Peter Schwebs and Steve Lyman. Back in the role of bandleader and on a new label—Germany's Berthold Records—Pollack is joined once again by Noah Garabedian on bass and Evan Hughes on drums. Their working relationship on Waves Of Albion is mature and accomplished yet still seems to thrive on the sheer joy of playing together.

The overall mood of Waves Of Albion is somewhat downbeat and reflective, in keeping with titles like "Sad Song" and "I Don't Believe In Love Anymore." But there's beauty in melancholy: make no mistake, this is a beautiful recording.

The title of Bon Iver's "Flume" might suggest images of water park fun—and it does have its upbeat moments, including Pollack's sparkling, occasionally jagged, solo—but much of the time it's more sedate, with melodic phrases that are reminiscent of country classic "Always On My Mind." Pollack's own "Fresno Interlude" is lighter, a playful tune with a gently funky groove that carries through into Garabedian's solo.

The trio's versions of two traditional standards, "Amazing Grace" and "Shenandoah," are lovely. The interplay between the three musicians on "Shenandoah" readily conjures images of the rolling river in all its majesty—Pollack's solo, underpinned by strong playing from Garabedian and Hughes, is strikingly energetic yet still reflects the emotion of the song. Pollack's "Sad Song" is the first of a quartet of delicately pretty tunes. "What Sarah Said" (by Death Cab For Cutie) mixes this prettiness with bursts of rapid-fire piano runs. It's followed by two more Pollack originals: the gorgeous and heartfelt "I Don't Believe In Love Anymore" and the dream-like "Waves Of Albion."

Infinite Playground was such an impressive album, full of promise, that it's perhaps surprising that Pollack has taken three years to release its follow-up—especially as this recording was made in August 2012. But good things come to those who wait. Waves Of Albion is at least the equal of its predecessor and in "Flume" and "I Don't Believe In Love Anymore" it has two of the most affecting tunes to grace any album, anywhere.