BY EDWARD BLANCO
November 23, 2009
Sign in to view read count 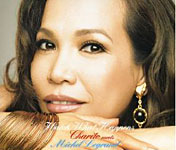 Recognized as a prominent jazz singer in Japan, Philippine-born songbird Charito has been a vocal force in Asia and Europe since the early 1990s, and now presents perhaps her most ambitious project to date on Watch What Happens, a delightful collaboration with Grammy Award-winning French composer Michel Legrand. Stating that "This album has become one of my biggest accomplishments ever," Charito does, indeed, deliver a classy performance with her distinctive interpretation of love songs from Legrand's songbook. The singer embarks on an American tour of a project, recorded in France and originally released in Europe in 2008. Gifted with a beautiful, velvet voice, Charito's calm, laidback approach to the music serves her quite well.

When Legrand accepted a request from the singer to perform a tune or two with the diva, the project shifted, from the original plan of a series of French love songs played by French musicians, to a collection of Legrand compositions sung exclusively, of course, with the maestro. Legrand plays piano as part of the jazz combo, scats on several pieces, and performs a duet with the singer on "Summer Me, Winter Me," "Pieces Of Dreams," and "Quand On S'Aime," where both artists sing in French and seem to have fun with the lyrics.

With Alain Mayeras sharing piano duties and providing the musical arrangements, Charito is simply mesmerizing on the title piece, "The First Time," and beautiful "What Are You Doing The Rest of Your Life," from the 1969 movie The Happy Ending—all accompanied by a full orchestra and string section (unfortunately, neither the orchestra or many of the key players are listed). Charito lends stylish interpretations to a couple of other Legrand compositions associated with film classics like "The Windmills of Your Mind," from The Thomas Crown Affair (1968) and "The Summer Knows," from the 1971 flick Summer of '42 (1971).

Though their meeting in Paris was not truly by chance, this recording was never really in the plans and, as luck would have it, Watch What Happens turns out to be a musical invitation that embraces the talents of a legend and the vocal energy of a very special singer. On Watch What Happens, Charito meets Michel Legrand, and the results is a wonderful album of mature light jazz.

Watch What Happens; Summer Me, Winter Me; The First Time; Pieces of Dreams; Once Upon A Summertime; How Do You Keep The Music Playing?; What Are You Doing The Rest of Your Life; Quand On S'Aime; Ask Yourself Why; You Must Believe In Spring; I Will Wait For You; The Windmills of Your Mind; The Summer Knows.