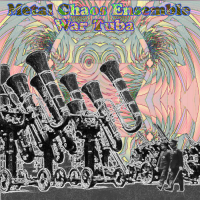 Multi-instrumentalist Dave Peck aka PEK hails from the Boston, MA area and hosts an extensive discography, spanning the 90s to present on his Evil Clown Records label. His Leap of Faith band is a long-running collaboration with alternating personnel. A former student of legendary saxophonist George Garzone, PEK is a man who stretches his imagination to the max via several disparate ensembles and ongoing relationships with numerous artists such as notable improvisers, saxophonist Bhob Rainey and percussionist Tatsuya Nakatani. Each album, while largely rooted in avant-garde expressionism, poses numerous propositions for the listener amid the art of anarchic sound-sculpting processes with unimagined detours and trajectories, or when his band-mates intersperse a horde of faintly melodic and fleeting mini-motifs. At times, notions of the classic British free-improvisation movement on an adrenaline-fueled discourse come to mind.

War Tuba is a free improv world music spree unlike most anything I've heard. With the respective musicians' use of the aquasonic waterphone percussion instrument, jangling chains, metal objects, game calls, piccolo copper clarinet and other off the beaten path implements, the trio abides by a euphorically executed campaign. Think of ancient rituals with some degree of bombast, coinciding with PEK's various reeds and horns dialogues, enamored by the pristine audio characteristics. And his plaintive cries on the tarogoto and clarinets with electric guitarist Catherine Axemunkee's unorthodox phrasings and hammering chord structures are enveloped by percussionist Yuri Zbitnov's color-coded maneuvers. It's one continuous piece, also featuring the guitarist's droning rock lines and other bizarre soundscapes that always catch you off guard, but the band also settles into an ambient, electro-acoustic vibe, contrasting the spirited free-form romps. Without a doubt, the group's ultra-surreal musical space defies rigid classifications, as widespread interpretations will most assuredly vary on an individual basis, which for the most part, is a good thing.