By John Barron
September 27, 2008
Sign in to view read count 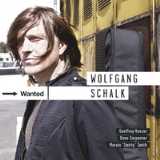 Guitarist/composer Wolfgang Schalk draws inspiration from his experiences on the New York and Los Angeles jazz scenes. These varied musical environments have led the Austrian native down a divergent musical path, colored with a variety of textures and moods. For Wanted, his fifth release as a leader, the guitarist teams up with pianist Geoffrey Keezer, drummer Marvin "Smitty" Smith and the late bassist Dave Carpenter. The combined musicianship of the quartet is a powerful force, skillfully exploring a set of progressive jazz originals penned by Schalk.

Schalk's single-note lines, on both electric and acoustic guitar, evoke the pin-point precision style of Pat Martino with the acumen of Pat Metheny. With a stripped-down tone, the guitarist rips through the title track, "Monroe Street" and "W 46" with inventive phrasing, adhering to a traditional jazz guitar aesthetic, yet remaining void of cliche. By contrast, listener-friendly tunes like "A New something" and "And Harry Said Goodbye" bring out a more patient and lyrical side to Schalk's improvising.

A musical high-point of the disc is the up-tempo "A Hip Bop," a hard-swinging, modal workout, providing ample stretching room for all. The tune features Smith's explosive drumming, Carpenter's flawless walking pulse and Keezer's flowing spontaneity—one of many examples of sophisticated musical camaraderie found throughout this exceptional release.