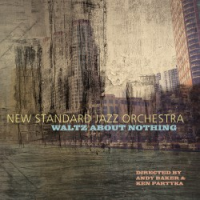 Since trumpeter Rob Parton's superlative JazzTech Big Band left the scene more than a decade ago, Chicagoans have been left to wonder when, or even if, another ensemble of that caliber would arrive to fill the void left by its departure. In 2020, their hopes were realized with the formation of the New Standard Jazz Orchestra, comprising a handful of JazzTech alumni and an assortment of the finest young jazz musicians in the Chicago area.

Having landed a regular monthly gig at the Windy City's venerable Jazz Showcase, where it battle-tested splendid new compositions and arrangements by the likes of Tom Matta, Chris Madsen, Tom Garling, John Wojciechowski, Mike Plog and co-leader Andy Baker, the NSJO decided the time had come to reach a wider audience by recording its debut album, Waltz About Nothing. Garling wrote three of the album's impressive originals, Baker two, Madsen, Wojciechowski and Plog one apiece to complement Billy Strayhorn's "Star Crossed Lovers" (arranged by Matta), Burt Bacharach's "Close to You" and Miles Davis' "Milestones." Besides "Waltz About Nothing," Baker composed and arranged the animated "Samba for Someone." He is nothing if not cryptic.

Co-leader and lead alto Ken Partyka solos with Baker on "Samba for Someone." They are quite good, and they have to be to keep pace with the ensemble's sizable corps of high-caliber improvisers. Wojciechowski is showcased on his "Lexicon," alto saxophonist Madsen on his "Spring and Fall," the late great tenor Mark Colby on Garling's "This One's for Sturm" (first name, Fred). Others who turn heads and enliven ears along the way are Garling, baritone saxophonist Mark Hiebert, trumpeters Marquis Hill and BJ Cord, trombonist Tim Coffman and pianist Dan Murphy. The rhythm section, anchored by drummer Todd Howell and including Murphy and bassist Tim Fox, is eagle- eyed and squarely in the pocket.

After building a solid foundation from Garling's zealous opener, "Metamorphosis," through to his good-natured "Sedentary Motion," the NSJO delivers the coup de grace: Garling's incendiary arrangement of "Milestones," smartly introduced by Murphy's nimble piano and enfolding ardent solos by Cord, Colby and Garling before a final exclamation point. Sandwiched between are Baker's pair of winners, others by Madsen, Garling and Wojciechowski, Plog's buoyant "Bu's Groove," the even-tempered "Star Crossed Lovers" and Madsen's resourceful arrangement of "Close to You," a pop song written for The Carpenters that lends itself surprisingly well to a jazz treatment.

Notwithstanding the departure of Parton's band and others such as the superb Chicago Metropolitan Jazz Orchestra, the city remains home to a number of respectable ensembles but none that approaches the proficiency or awareness of the NSJO. And as a bonus, the orchestra also swings. New Standard? Beyond question and without a doubt. Three full-throated bravos!