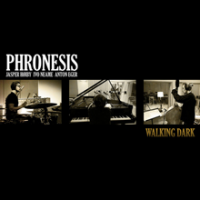 Danish bassist Jasper Høiby leads the band, which he formed in 2005 after moving to London. On Walking Dark he's joined by British pianist Ivo Neame and Swedish drummer Anton Eger. If the term piano trio suggests a dominant instrument or musician, then it's the wrong description for Phronesis. Like its European counterparts Michael Wollny's [em] or the Kit Downes Trio, no one musical personality overwhelms the others. All three musicians make dynamic, creative contributions to the sound as well as to the writing.

Eger wasn't available for Alive so Mark Guiliana was on drums. Guiliana was a key part of the album's success, matching Eger's lightness of touch and ability to use the entire drum kit to full advantage. Eger is more playful, frenetic and unpredictable than Guiliana, bringing an added edge to the overall sound—Høiby's gentle "Eight Hours," which appears on both albums, allows a direct comparison of the two players' styles.

Eger's sound as he skitters across his drums and cymbals presents a fascinating counterpoint to Høiby's powerful, fat-toned double bass. Neame takes full advantage of the interplay between bass and drums, sometimes matching Høiby's powerful rhythm, sometimes darting around the keyboard in emulation of Eger's percussive patterns. At times, the musicians give the distinct impression that if they swapped instruments the sound would be just as strong, just as intricate and imaginative.

Høiby's "Suede Trees" is almost infuriatingly catchy: a simple groove which all three players lock into with ease sets up a mood of upbeat jollity which is compounded by Høiby's bouncy bass solo. "Upside Down," another Høiby tune, revisits this positivity. Neame's "Passing Clouds" is more reflective and melancholy, a mood which he takes further on the lovely "Charm Defensive." Eger's three compositions all have a jagged urgency about them. "The Economist" in particular fairly races away, filled with pent-up energy.

Rather than describing a set of downbeat, pessimistic tunes, Walking Dark refers to a series of shows known as the Pitch Black concerts. Played in total darkness, they were a dedication to Høiby's visually impaired sister. This is music that reflects many moods, but never loses its optimism. Phronesis creates music from the heart and soul, and makes the world just that little bit better.