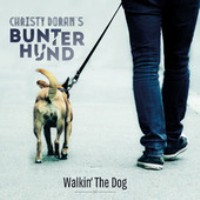 Whilst many 64-year-olds look forward to retirement, Switzerland-based Irish guitarist Christy Doran on the other hand has been kicking into creative overdrive. No.9 (Leo Records, 2013) was a beguiling duo date with Chinese pipa virtuoso Yang Jing, while Mesmerized (Double Moon records, 2013) saw Doran's long-running post-rock group New Bag rejuvenated by the exhilarating vocal presence of Sara Buechi. "I don't think art should have borders or containment," Doran told All About Jazz in a 2013 interview, "there's still a lot to be discovered, explored and evolved." A strong current of exploration and discovery marks Bunter Hund's debut, whose headwaters—stemming from multiple sources—converge in vibrant unison that is consistently engaging but never predictable.

Accordionist Patricia Draeger forms a striking front-line partnership with Doran, fired up by bassist Christian Weber and drummer Lionel Friedli's evolving rhythms. Bunter Hund, however, serves up much more than just traditional front-line and rhythm section dynamics. For much of the music the quartet is so tightly synchronized as to sound as one voice, notably on "Indian Arps" where the roles of rhythm and melodic development are not only shared but are, to a large degree, one and the same thing. Elsewhere the music veers between the visceral and the abstract, often within the same song.

'Three Punk Chords Tango" does what it says on the tin, though the rocking energy is counterbalanced by quite lyrical pools. Doran and Draeger's solos are studies in contrast—the guitarist all spark and flame while the accordion purrs as sweetly as a harmonica. "Lift" plots a labyrinthal course where infectious grooves and fractured meters chase each other's tails. The lively rocker "Hurry Up ,n' Wait" features scintillating group play. All four voices fire as one in passages as controlled as they are energetic. Looser jam-like exchanges between Draeger and Doran are the key to some great soloing.

Doran is in typically inspired form throughout. Time and again his gritty yet fluid improvisations tumble and soar, punctuated by explosive riffs, judicious use of pedal effects and crowned with singing cries. On the starkly atmospheric "Armenochori," Weber's arco and bass work conjures lyrical introspection but it's Doran' piercing intervention that steals the show on an otherwise ruminative number. "Delhi-Kerala Express" is a genre onto itself; machine-gun drum and guitar phrases and punchy staccato rhythms are suggestive of a train in motion, but Doran's scratchy psychadelia creates more hallucinatory visions. Guitar and accordion feed off each other in loose improvisation that rattles and simmers above Friedl and Weber's mostly arrhythmic stirrings. The quartet then harnesses its energy with greater collective direction, bringing to a conclusion this curious, episodic ride.

Greek mythology inspires the continually unfolding drama of "Eos and Thitonos." Doran and Draeger's rapid free-wheeling exchanges give way to abstract improvisations, out of which Doran signs off with a final energized solo, rushing and snarling. Bunter Hund's debut is a striking tale of genre-busting, free-spirited play whose delights reside in the shadow play between discipline and freedom.