By TYRAN GRILLO
December 21, 2017
Sign in to view read count 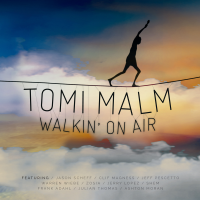 Walkin' On Air is the debut solo album from Finnish composer/producer Tomi Malm, who rose to international prominence with the release of his modern classic, Fly Away: The Songs Of David Foster. His superior arranging skills and ways of unpacking familiar elements have led him to this project, which boosts his own songwriting into the stratosphere with an all-star cast of musicians culled from the session and touring bands of his greatest influences, along with a team of guest vocalists.

Malm understands not only the underlying formulae of timeless songs, but also how to bring out the colors of said formulae so that no patch of canvas is left begging for paint. Examine any aspect of this phenomenal album—from production to packaging, and everything between—and you will discover the fullness of his vision at play. Having at least co-written all but two tracks, Malm makes one lasting impression after another throughout. Said outliers are living testimony of his arrangements. "Show Me A Sign" is a poignant example. For it, Malm surrounded a recording of the late Warren Wiebe with original architecture and turned the song into a duet with the addition of Polish songstress ZoSia. Julian Thomas adds his own vocal curves to "A Reason To Smile," an unreleased song by Jeremy Lubbock (who has written for Al Jarreau and Manhattan Transfer, among others) that soothes the weary heart with its jazzier contours.

Thomas extols further balladic wonders in "When You're Gone," the changes of which wrap us in a softness hard-won in today's popular assembly line. Ballads are, in fact, the album's lifeblood. Whether in "Wouldn't It Be Kinder," enlivened with fullest expressive power by longtime Kenny Loggins collaborator Shem von Schroeck, or "Today," a scintillating farewell eased by the voice of Ashton Moran, sensitivities abound. That said, Malm also knows the value of a good groove. In that vein, the title song fires on all cylinders, boasting the talents of Jason Scheff, who fronts a deep rhythm section and spread of horns. "Let's Get To It" takes kindred leaps into a sunlit future, with singer Jerry Lopez as our guide.

The album's reigning highlights number three. First is "Favor," which contextualizes the soulfulness of Frank Adahl in a tale of attraction and inescapable love. Second, Jeff Pescetto offers his rendering of "Perfect Imperfection," an 80s power ballad reborn. Finally, "You Belong To Me" highlights the vocal wizardry of Clif Magness in a chorus of epic harmonies. Along the way, Malm treats us to some instrumental beauties, including the album's opener, "Kuwakaribisha," and the Pat Metheny-esque interlude, "Still Life." In both is actualized a core philosophy of seamless chord progressions, soaring themes, and far-reaching musicianship. What we're left with is a profound time capsule of an album that must be savored above the clouds to be believed. We need more of this.

Kuwakaribisha; Favor; When You’re Gone; Walkin’ On Air; Show Me A Sign; Perfect Imperfection; Still Life; Wouldn’t It Be Kinder; Let’s Get To It; A Reason To Smile; You Belong To Me; Today.