By Ian Patterson
November 11, 2007
Sign in to view read count 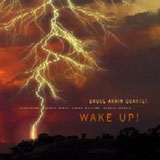 There can't be much wrong with red wine, tapas and siestas, judging by the quantity and quality of music coming out of Catalunia and independent label Fresh Sound New Talent. This time, Barcelona-based American saxophonist Bruce Arkin has delivered an album of refreshingly good tunes which are eminently whistleable yet challenging at the same time.

Superbly supported by Albert Bover on piano, Chris Higgins on bass and Jorge Rossy on drums, "Uncle Beasley starts with the rhythm section planting a slow but swinging beat. Arkin, on tenor, introduces the sweet melody which gradually dissolves into an impressive solo. Here and elsewhere Arkin demonstrates an intuitive ability to build a solo and, in doing so, say something worthwhile. There are no wasted notes here. The melody returns to the tenor, which acts as a bridge for Bover to take up the thread. His single note lines, bursts of speed, and block chord punctuation compliment Arkin's tenor style nicely and both make their instruments sing.

Melody and rhythm ride tandem on Wake Up!. Arkin's soprano on "Draconian Melee cries like a clarinet while the rhythm section bounces along. "As if You Didn't Know combines a truly glorious melody with a buoyant, tango-like bass line and Rossy's nimble stick work. Higgins and Rossy work well together, refined and swinging, and Rossy is in particularly fine form on these eight tracks, utilizing his kit with taste and imagination.

On "Atocha however, rhythm goes out the window. A tortured-sounding sax leads off, giving way to a gentle, more reflective melody but the drums tumble and clatter, following the sax's utterances on a song which remembers the 2004 bombing of Madrid's central train station.

The tempo of the music, for the most part, is unhurried and tunes like "Oh No More War have a lovely, bright and breezy feel, which cannot however, disguise a bittersweet resonance in Arkin's playing. The album closes with the splendid "Tookie. Its languid, emotionally charged air recalls the John Lewis/Modern Jazz Quartet classic Django, with Arkin delivering another fine solo.

Uncle Beasley; Just for You; Draconian Melee; As if You Didn't Know; Atocha; Oh No More War; All I Wanted Was You Bitch; Tookie.