BY GLENN ASTARITA
October 5, 2006
Sign in to view read count 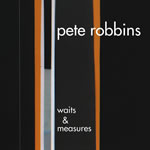 To coincide with an extensive tour of the northeastern US, Brooklyn-based alto saxophonist Pete Robbins has issued his second effort as a leader. And it offers a rock-solid glimpse of his artistry, chops and interesting methodology, all steeped within copious jazz-related genres. Simply stated, Robbins is a style master who sets himself apart from many of his peers.

The band sustains interest by maintaining a sense of evolution and drama; rapidly paced funk or bop grooves often blossom into climactically oriented unison passages. Gamble sports a hard rock sound and demeanor on "Cankers and Medallions," where Robbins and saxophonist Sam Sadigursky execute ominous undercurrents that eventually segue into capricious movements. In sum, Robbins should win over a horde of admirers with this outing, which conveys asymmetrical parts chops, gusto, funk, fusion and a clear-sighted view of the jazz canon.