The Doors: Waiting For The Sun 50th Anniversary Deluxe Edition

By DOUG COLLETTE
October 27, 2018
Sign in to view read count 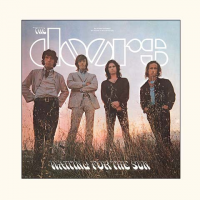 Even though it was just a year after their resounding debut, The Doors (Elektra, 1967) and a followup of sizable, if slightly lesser magnitude, Strange Days (Elektra, 1967)—arguably the stronger of the first two records out only months apart the same year—the bloom was off the rose for The Doors by the time 1968 rolled around, creatively if not commercially. Indeed, much of the mystery within and around the Doors was gone by their third album Waiting For The Sun, despite the fact it became their sole Number One-charting album. And while the cover doesn't exactly say it all, it tells a lot: in contrast to the shadow imagery of the first album and the one immediately preceding it, a fairly conventional group photograph portrays the quartet looking more or less disconsolate, not to mention estranged with one another, each looking in a different direction.

Over the course of his essay inside the LP-sized booklet in the 50th-Anniversary Edition. Rolling Stone Magazine's David Fricke communicates as much in his customarily deft balancing act of roles of fan and analyst. Oft-quoted engineer Bruce Botnick reaffirms those impressions, but only so far, in setting up those that arise from hearing the music enclosed inside this 12"x12" hardcover. Remastering of the original recording by the Doors' aforementioned long-time sound guru surely brings out the nuances and streamlines the impact, but nevertheless does not (because it simply cannot) gloss over the erratic nature of the material. Still, comparison of the finished tracks to the nine rough mixes to some degree magnifies the lack of engagement on the part of Jim Morrison and, by extension, how that resulted in often tentative instrumental accompaniment. Close scrutiny also reveals more than a few flashes of brilliance

The surefire and wholly justified confidence of the first two Doors albums—and to be fair, the best moments here, contained within the live tracks on CD two—had given way to an often false bravado. Literal-minded and ordinary such as the mainstream hit "Hello, I Love You" and the bombastic sloganeering of "Five to One" replaced incandescent ingenuity too much of the time, leaving the borderline ordinary likes of "Love Street," "Summer's Almost Gone" and "Wintertime Love" as arguable standouts when such cuts would remain pure pacing or downright filler on the previous two records.

Jimbo has some moments as a lyricist (...'Noon burned gold into our hair...') but "The River Knows" is an early sign of his infatuation with Sinatra, while "Wintertime Love" is likewise prosaic even as guitarist Robbie Krieger's electrified (and electrifying) flamenco-based playing redeems "Spanish Caravan." The most notable aspect of the enhanced sound, however, may well be the muscular support supplied to drummer John Densmore by bassists Leroy Vinegar, Kerry Magness and Doug Lubahn. As denoted in the proverbial fly-on-the-wall accounts here from recollections the original sessions produced by the late Paul A. Rothchild, the Doors were aware of the erratic nature of the proceedings, (even if they didn't always want to admit it at the time) and the proverbial 20/20 hindsight eventually engenders a healthily-detached objectivity in hearing this music today.

Notwithstanding a sly reference to redundancy centered on the previous 40th Anniversary package (which included "Celebration of the Lizard" in its entirety), the alternate studio recordings and handful of concert cuts on this set offer an alternative vision of the band at its best, that is, when its frontman kept himself focused and free of the celebrity he both relished and reviled. The logic of sequencing the outtakes might have been better clarified, but hearing them is revelatory nonetheless, particularly insofar as the aforementioned ennui radiating from the cover photo clearly minimized the band's inclinations to improvisation that might well have mitigated the shortfalls of Waiting For The Sun as originally released.

The Doors would' have added considerable weight to "Hello" had they noisily ridden out the end only teased at here. Likewise, even more of Ray Manzarek's elegant piano work would further elevate the genuinely poignant quality inherent in "Summer's Almost Gone," while extension of the interweaving of keyboard with Robby Krieger's comparably nuanced electric guitar could constitute a viable remake. Certainly "Spanish Caravan" would also benefit from an even longer acoustic guitar intro, and/or more of Manzarek's classical-cum-roller rink organ. Harpsichord on "Wintertime Love" evokes a similar response, especially as it's set against a particularly vulnerable vocal from Morrison. And rather than take an almost all-or-nothing approach to "Celebration of the Lizard," producer Rothchild and the Doors might've considered inserting snippets of the large piece throughout the album to amplify the effect of submerging Morrison in the mix of increased dissonance on the condensed excerpt "Not to Touch the Earth."

Recorded in mono via a single mike, five 1968 concert cuts from Copenhagen don't proffer much more of a a jam-oriented ensemble on this 50th Anniversary Deluxe Edition. Instead, the aural portrait is that of a band so focused as to be volatile despite (or because of?) the unpredictable presence of their front man. Immediately preceded with Willie Dixon's "Back Door Man," "Five to One" sounds like an extension of the barroom brawler tone of its studio counterparts (the studio outtake of "My Wild Love" has boozy overtones too), nearly turning into an ironic comment on the futility of anarchism rather than advocacy of it. Its unsettling atmosphere is further elevated as the guitar screams alongside the hammer-down drumming. Prefacing the Number One hit single with "Texas Radio & The Big Beat" conjures up a carnival atmosphere soon to override the Doors' concert performances, but here morphs into the means of a tragically absurd end through the performance art of "The Unknown Soldier."

There's more than a little irony involved in noting the continuing enhancement of the (otherwise increasingly obsolete?) CD's enclosed in this expanded package right next to a vinyl LP, once heralded as a sophisticated tech development in its own time. The au courant comeback of the latter medium in the last few years is altogether reminiscent of the recurring and almost predictable cyclical fascination with the Doors now hitting the half-century mark with the Waiting For The Sun 50th Anniversary Deluxe Edition.