By Doug Collette
December 12, 2021
Sign in to view read count
The celebration of trumpeter/composer Wadada Leo Smith's 80th birthday milestone year culminates with yet another four-CD box set plus a proportionately sumptuous single-disc package. Both sets include extensively-annotated booklets with background on the graphics of the package as well as the music itself, with a thorough attention to detail reflective of the Mississippi native's boundless drive to stretch his own limits and those of his collaborators. As with the three-CD sets issued that precede these titles—Trumpet (Tum Records, 2021) and Sacred Ceremonies (Tum Records, 2021)—each title has its distinctions, the most readily discernible of which is the cohesion arising from the performance in both the quartet and trio contexts. Indicative of the reciprocal generosity Smith extends to other musicians, his eagerness to widen his circle of collaborators is as ambitious as his range of compositional and improvisational expertise. 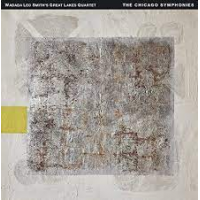 Wadada Leo Smith's recent career has been a series of lessons in how knowledge of and experience with improvisation aids in the compositional process. In the case of The Chicago Symphonies, the spontaneity overlays the structure, almost but not quite indecipherably. As much as duration of the pieces such as "Gold No. 1" runs from the high thirty-to-high forty-minute range, separating each of the individual titles on its own compact disc confirms the continuity of the whole package. Toward that end too, the consistently intuitive musicianship of the two core ensembles attains (and maintains) a collective balance: each player contributes as much as he receives within the shared performance dynamic. As for the bandleader himself, the relatively conventional approach to numbers like "Sapphire Symphony-No. 4" offers a simplicity that he clearly finds invigorating, a sensation so infectious it bristles throughout the playing of his accompanists too. Such detail within the musicianship is readily apparent across the stereo spectrum, as mixed by Greg DiCrosta and Risto Hemmi.

A powerhouse in more ways than one, this single CD finds Smith as the nexus of spontaneous creativity linking two musicians who prior to this title, had never played together. But keyboardist Vijay Iyer and percussionist Jack DeJohnette interact like experienced collaborators. There is no undue ego here on "Rocket," for instance, but there's no overly deferential attitude in play either: Iyer. DeJohnette and Smith are all more than a little comfortable in their own respective skins, so each presents himself forthrightly, confident in their well-established personae. As a direct result, all three men and the music they make on appropriately, "Deep Time No. 1," benefits from the interactions. There's a lissome elasticity in these five tracks, all three participants correct in a shared belief the dynamic between them can conjure themes melodic and rhythmic well worth exploring to the fullest. The sense of mutual admiration is palpable here, thus inspiring the artistry to greater heights.