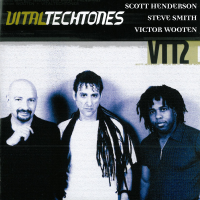 Ever find yourself wandering the record store or surfing the cyber coffers for jazz fusion with edge, with virtuosity, and vitality? Yeah, there’s enuff dross out there playing at being fusion but is infected with smooth jazz fuzak virus. You know the stuff, a waste of $18 or $19 bucks, better as a coaster than for listening to for any length of time.

Well look no further, fusion fans, VTT2 delivers all the funky, bluesy, rocking out, high-energy, jazz fusion you need. It seems Steve Smith, Scott Henderson, and Vic Wooten must have sold enough discs with “ VTT1 ” to do it again. I’m glad they came back full-force too versus tossing out some limp echo of their initially effective fusion attack.

And so what of this offering you ask? If you wanted Henderson to keep on being the fusion “Wildman” then he fills the bill. That guy is outta control! He punishes his “Ma” with that axe, riding the whammy bar 90% of the time, overdriven, oh so blue, and ever loose in interpretation but tight on every time sig and unison line turn. Wooten’s bass work rivals the immortal Stanley Clarke at times and goes a few steps ahead. “Slap dat thing Vic!” Hmmm good! Now Mr. Smith is a drummin’ dynamo everywhere and responds/feels/moves/drives/fills everywhere perfectly.

The spirit of the ETERNAL JAM reigns throughout on this disk with nary a pre-packaged moment. Everybody feels at home with anything his band mate chooses to do and makes it work. One thing I admire about Henderson is when other fusion/bluesy rockers find a cool note run or bend they may hit it two or three times to say, “Listen to that . . .” but “Wildman” Henderson may bang on that sucker like a manic obsessive, woodpecker, milking it, squeezing it, stopping-time, trance-riffin’ and all the time Wooten and Smith just groove on. It is this very type of fusion freedom that adds suspense and evokes true soul-fire in the passing eternity of the moment. This is what is phat about VTT2. Did I mention the signature Hendersonic abuse of a Wah-Wah pedal? Thank you, Scott.

Ten trax of cool, fast, slow, meandering, racing, dreamy, screamin’ jams await you fusaholics again. Methinks Tone Center’s label has become a torch for fusion that all other record labels may see “the light beyond”, (see related review). Highest recommendations, once again, for the VTT dudes.