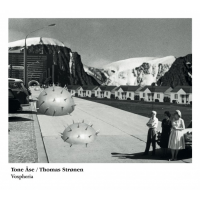 The covers of Norwegian label Gigafon, designed by bassist Rune Nergaard, send an unsettling message. The cover of Voxpheria is no different, with its alien scenery and what looks like a homage to Norwegian thriller writer Jo Nesbø's invented torture instrument, Leopold's apple, taken from his The Leopard (Harvill Secker, 2011).

And indeed, the highly personal, poetic soundscapes of vocal artist Tone Åse— known for her trio Bol and the experimental all-female vocal ensemble Trondheim Voices—and prolific drummer Thomas Strønen were not created for casual, indifferent listening. Both succeed in defining a new, uncharted musical universe that marries sounds and texts through inventive, minimal use of voice, percussion and live electronics.

"Numb Street Cabaret," after "n/Umb a," by American poet e.e. cummings, stresses an imaginary, futuristic rhythm, the basis for Åse's expressive recitation of the poem. The smoky color of her voice and her phrasing reference the pioneering Norwegian vocal artist Sidsel Endresen, with whom Strønen collaborated on Humcrush's Ha!, Rune Grammofon, 2011), but Åse has an assured, different vocal range of her own. The minimalist interpretation of "Problem," by Norwegian modernist poet Rolf Jacobsen, symbolizes the essence of this album:

the machines only move the hunger two stairs up;

now it sits in the heart.

On "Chson," the duo experiments with wordless vocals and electronic beats, while on the spare "Koloust," each of the dreamy vocal utterances are answered by echoing, soft touches of drum skins and bells. Åse's processed and detached vocals on "Mostly," after a poem by Jacobsen, bring to mind Laurie Anderson's alter-ego character, but here Åse's nuanced reading and Strønen's masterful fractured rhythms emphasized the poem's message about the fragility and passing of our lives.

The sensual "Heilaloo" rolls leisurely after an infectious drum beat but ends in a distorted electronic storm that morphs organically into the soft, distant intricate electronic texture of "Grains," which becomes darker and unsettling as it develops. On the most experimental piece, "Raised, Rave," Åse and Strønen manage to set a powerful interplay between her monosyllabic gibberish vocals and distorted electronic noises, and his inventive rhythmic framework that encompasses the piece into a cohesive framework. The last piece, the minimalist straight-ahead recitation of "Dive for Dreams," after a poem by cummings, sums up Åse and Strønen's inspiring musical journey:

if the seas catch fire.

A beautiful and inventive achievement.