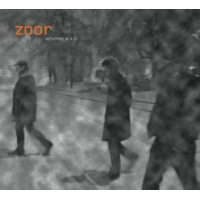 Zoor is a French trio consisting of tenor saxophonist Bertrand Denzler, electric guitarist Jean-Sébastien Mariage and drummer Antonin Gerbal. All three have considerable experience with other bands -Gerbal in the jazz trio Peeping Tom and the improv trio R Mutt, both with releases on Umlaut, of which Gerbal was a co-founder in 2009. Denzler is well known for his albums on Potlatch, notably his innovative solo sax record Tenor (Potlatch, 2010) and in the sax quartet Propagations (Potlatch, 2007); he has also recorded with Mariage for Creative Sources. But, prior to Zoor, Denzler and Mariage's main collaboration was in the long-standing (together since 1999) quintet Hubbub. That prolonged association means that Denzler and Mariage are used to playing together and so form the axis of Zoor.

Although this trio has been together since 2011 and they have gigged together regularly, Volumes A + B is their first album release. It consists of two extended pieces (the "Volume A" and "Volume B" of the title) which are about forty and thirty minutes long, respectively. Both were recorded live, the former in April 2013, the latter two months later. Denzler has spoken of the idea he had for Zoor as a trio which would play improvised music but without extended techniques. Refreshingly, in Zoor all three instruments are clearly discernible throughout, with no electronics, treatments or effects, thereby fulfilling Denzler's desire to use the "traditional" sound of each instrument.

With all three playing constantly, a dynamic tension is ever-present between them, with no-one soloing, taking the lead or dominating—truly, a very even music. The extended duration of the pieces is the key to their appeal and success; nothing here sounds rushed or forced and, when appropriate, notes are sustained or repeated for as long as needed. Frequently, a musician seems to be savoring the sound of their own instrument and the way it interacts and blends with the others; over repeated listenings, that is a pleasure the listener will also share. More volumes soon, s'il vous plait...