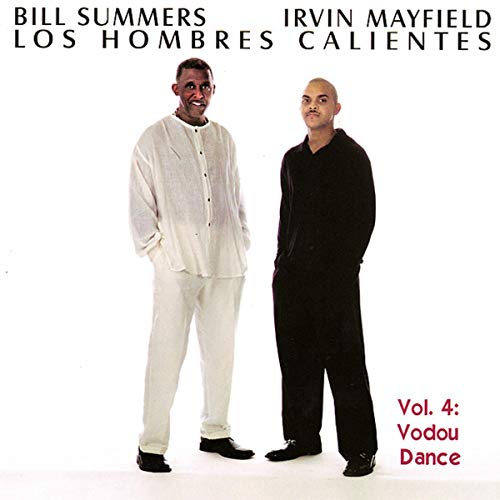 Trumpet player Irvin Mayfield has been a primary shaper of the modern musical landscape of New Orleans. He serves as artistic director of the New Orleans Jazz Orchestra and as executive director and artistic director of the Institute of Jazz Culture at Dillard University in New Orleans, and has performed his own arrangements of spirituals and original works with the Louisiana Philharmonic Orchestra (2001 commission) and the Louisiana Philharmonic String Quartet. Mayfield also leads his own Quintet and performs with Bill Summers, an ethnomusicologist and percussionist who has worked with Herbie Hancock’s Headhunters, Stevie Wonder, and Quincy Jones, as Los Hombres Calientes.

In his inner sleeve notes, Summers writes, “This CD was done in love and respect for our ancestors who left this rich spiritual, artistic, and scientific legacy.” Los Hombres recognize this legacy by linking the major pieces of this set together with twelve tracks, credited as “traditional,” which are mostly vocal chant and percussion interludes from impromptu jam sessions with native folk musicians. Through these field recordings from Haiti, Brazil, Jamaica, and Trinidad, Volume 4: Vodou Dance ties the musical and cultural traditions of the Caribbean together with the Afro- Cuban and New Orleans jazz traditions.