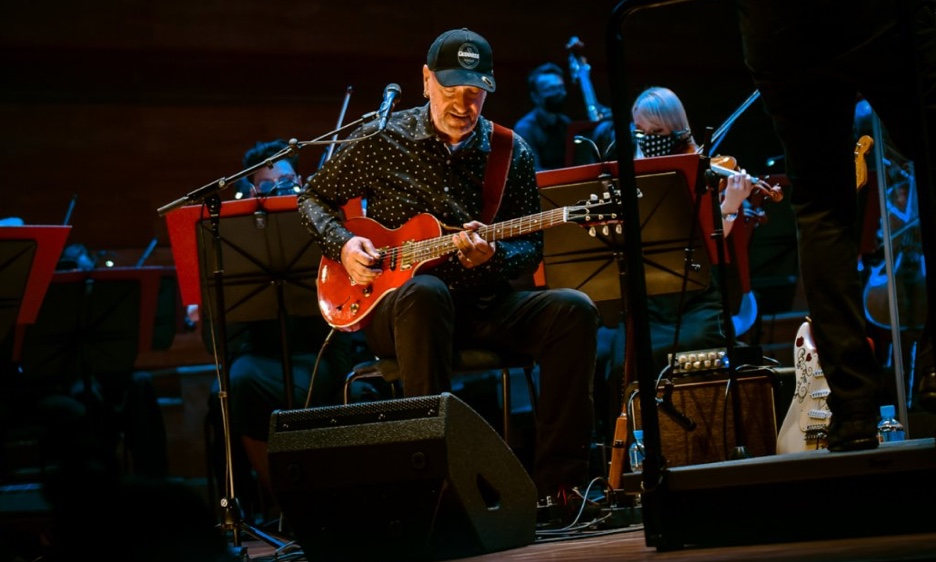 At first glance, rock and classical music seem like polar opposites; one favors guitars, excess, and outrageousness, while the other side is all about poise, refinements, and good taste. Rock musicians, at least the more adventurous ones, have always fallen for the cinematic quality, the sweep, and the drama that a philharmonic orchestra can bring to their music. The results of the meeting between these two different institutions have always been mixed. Some have teamed up with great orchestras, conductors, and arrangers and the results have been, at times, ridiculous. But in certain cases, this meeting has elevated the music to another plateau which has borne strangely delicious fruits. Vlatko Stefanovski's performance with the Macedonian Philharmonic Orchestra, as part of Macedonia's 30th-anniversary celebrations, was one of those warm and uplifting performances that marked this second year of the pandemic.

Stefanovski, who is one of Europe's premier guitarists, has been enjoying an enviable live reputation with plenty of memorable concerts under his belt and a plethora of studio recordings and diverse projects. Even during the corona pandemic, when live performances have been limited and scarce, he had many invitations to perform throughout the Balkan region as soon as the health protocols allowed. Performing with a philharmonic orchestra is not something new for him; in 2012/3 he and guitarist Miroslav Tadić and Teodosii Spasov toured throughout Europe as soloists with conductor Kristijan Jarvi and various European philharmonic orchestras, the highlight being the performance with the London Philharmonic Orchestra at the Barbican. The material for those concerts was based mostly on Macedonian folk songs and other folk traditions from the Balkan region (thus it was named Balkan Fever). This concert was a different kind of affair.

Arranged and conducted by composer and wizard Dzijan Emin, the concert represented a walk through Stefanovski's greatest hits. Stefanovski's oeuvre is well-known, so Emin had no problem finding the right arrangement and feel for the songs. Emin is someone who seems to enjoy blurring the lines between rock and jazz and classical and has been composing, arranging, and conducting successful and intriguing crossovers between classical music and other genres. In this case, he crafted cinematic layers to Stefanovski's songs that augmented and enhanced the templates and sentiments already present in the original songs rather than overloading the songs with grandioso arrangements. The concert kicked off with "Utrinska Pesna" from Leb i Sol's first album and was a prime example of Emin's layered, cinematic approach. The bulk of the repertoire actually featured songs from the Leb i Sol period of Stefanovski's career: ballads such as "Ja Nisam Tvoj," "Talasna Dužina," "Čuvam noć od Budnih," instrumentals such as "Kumova Slama," and pop songs like "Kalabalak," "Istok-Zapad (Telepatski) "Kao Kakao." The set culminated with a spirited rendition of "Jovano Jovanke," a folk song that became a staple and Stefanovski's repertoire and a playground for his improvisations. It was there that both Stefanovski, his backing trio, and the orchestra shone the brightest.

There is always something exciting about Stefanovski's live playing—even though he is nearing the 50th anniversary of his career as a professional musician, he still plays with the excitement of a kid who has just learned to play the guitar and wants to show everyone. His guitar playing is a marvel to behold—fast and fluid, seemingly effortless, even at its most intricate. On this occasion, he soloed sparingly and economically, yet his playing was inventive. After a tight, impeccably performed 70 minutes, Stefanovski returned to the stage for an encore of "Gypsy Magic" which was a cheerful ending. This endeavor brought together many participants, however Stefanovski and Emin had an undeniably good feel for what they are creating, and they managed to transfix the audience right from the beginning to the very end of this concert.