By HRAYR ATTARIAN
October 30, 2015
Sign in to view read count 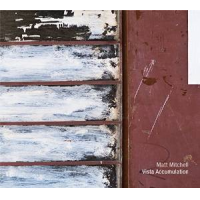 Composer and pianist Matt Mitchell creates haunting and vibrant soundscapes on his second release for Pi Records, Vista Accumulation. The eight, multilayered, originals that comprise the double disc set are organically fluid in structure with a tense ambience and a barely contained fervor within.

Saxophonist and clarinetist Chris Speed opens the stimulating "The Damaged Center" with his fiery tenor. The rest of the ensemble percolates and gallops around him. Initially somewhat harmonious the group dynamics grows delightfully more dissonant as Speed honks and squawks and Mitchell lets loose jagged glissandos. Drummer Dan Weiss' thundering beats and bassist Chris Tordini's restive reverberations fade as Mitchell takes center stage. His intricate and expansive solo is simultaneously cerebral and emotive. The ardent, gripping motifs that opened the piece return for the climactic and satisfying conclusion.

Mitchell overlaps repetitive harmonic fragments to construct shimmering musical mosaics. On "Numb Trudge" his percussive chords together with Tordini's throbbing strings and Weiss' crashing cymbals create hypnotic and hard-edged refrains. Speed weaves around these crystalline vamps a serpentine melody that is marked by his muscular tone. Gradually the mood grows riotous and expectant before Mitchell enters with an angular and contemplative monologue. His bandmates bow out allowing his chiming keys and resonant notes to echo darkly in the enveloping silent pauses.

Speed showcases his lyrical side with warm, incandescent clarinet phrases flowing over the others' rolling rhythms. The frantic pace and the free flowing individual streams of consciousness slowly coalesce into a euphonious, complex and breathtakingly exquisite sonic image.

Not for the faint hearted Vista Accumulation is an edge of the seat, gripping and cohesive work that nevertheless is quite accessible. Mitchell manages to provoke and challenge with his intelligent eloquence all the while eschewing self-indulgent abstruseness. As this record amply demonstrates Mitchell is fast emerging as a unique and bold voice in modern music.