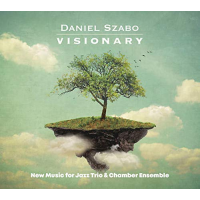 It takes maybe ten full seconds to be intrigued by Visionary. Pianist, composer, and arranger Daniel Szabo presents a kaleidoscope view of futures integrating a woodwind sextet, string quartet, and a jazz rhythmic section. There is no meeting somewhere in the middle to be found here. Instead, they sublimely merge as an ensemble for an intriguing ride.

The subtle nuances of chamber music joined with jazz sensibilities creates a pallet of new colors placed gracefully just in, and outside, the lines of the coloring book. Szabo and company go there gently, as opposed to pushing into the new world with trepidation.

The opening and title track, "Visionary," embodies the soul and intent of this record. Drawn in first by flautist Sara Andon, Szabo then graciously invites you along, capturing both the elements and focus of this forward excursion. The roaming "Vaison-La-Romaine," buoyed by acoustic bassist Edwin Livingston, leads us to a "Cosmic" world that abounds with possibilities. It also culminates with a drum solo that a blindfold test would lead the astute listener to assess that it must be Peter Erskine. Indeed, the legendary jazz-fusion drummer lends his artistry to all six tracks and co-produced the record.

Szabo's modern arrangement of Wayne Shorter's "Infant Eyes" follows and serves both as a comfort from the past and a new way to move forward. It is the only song on the record not composed by Szabo and features the great Kim Richmond on alto sax. In the aptly named "Floating," it is with remarkable ease that a feeling of calm is instilled, perhaps imbuing a sense of awaiting nirvana. The feeling is enhanced by the cunning flute solo of Bob Sheppard.

The closing piece is a joyous, yet intentionally short of a jubilant finale. It speaks of the sustainment of mood, not of peaks, which inevitably lead to valleys. The rhythm section's Livingston and Erskine manage to hold that glacier edge throughout the "Underwater" adventure, whilst still being able to add melodically interspersed layers and nuances.. Throughout, Szabo illustrates a passion for the classical as well as the strident vocabulary of a jazz pianist. An outstanding class of musicians join him and bring forth strong efforts and compatibility in the making of, and the inspiration behind, Visionary.