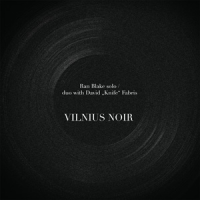 Although recorded in concert in a church in the Lithuanian capital, Vilnius Noir has the feel of eavesdropping on a late night conversation between two old friends who don't need to say very much for the other to grasp the intended meaning. Although guitarist Dave Fabris hails from a different generation than pianist composer Ran Blake, they share a sophisticated approach to the material at hand in this set of duos and solos. They met at the New England Conservatory of Music in Boston where Blake led the Contemporary Improvisation Department (formerly Third Stream Department). Fabris, whose muse leads him to both experimental jazz and modern chamber music, has appeared on three previous albums with his mentor.

Standards and covers make up the majority of the program on this limited edition LP, some by the likes of Ellington, George Russell and Michel Legrand, but others more obscure. These are placed alongside three Blake originals and one traditional folk song. Half the cuts feature Blake unaccompanied, there are five duets, and a solo for Fabris completes the recital. Blake elegantly deploys an encyclopedic knowledge of both modern classical and blues and gospel tonalities distilled into a deeply personal style in which he manipulates tempo and dynamics to suit his purpose. Tunes are approached obliquely. Shifting from the utmost delicacy to ringing crescendos, Blake implies harmony and rhythm, rarely using more than the bare minimum to make his point.

With his lucent tone and varied attacks, Fabris matches the pianist blow for blow as the spotlight shifts back and forth between them. They essay a spare, gentle melodicism on the opening two cuts, becoming more animated on Russell's "Jack's Blues/Stratusphunk," where they indulge in a fugue-like mirroring before a swinging section to take the medley out. "Mood Indigo" closes the set, with Fabris wielding his slide, exquisitely bending notes in consort with Blake's sideways hints. Alone, Blake displays a feather-light touch on the Yiddish lullaby "Shlof Mayn Kind," the notes like falling snow flakes. The rendition of Stevie Wonder's "My Cherie Amour" becomes almost garrulous in comparison with the rest of this intimate set, the theme easily recognizable, though typically embellished with digressions in the bass register or dissonant asides.