BY HRAYR ATTARIAN
September 17, 2009
Sign in to view read count 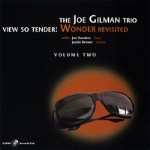 A master improviser interpreting the works of one of the greatest popular composers should make for a stimulating listen. Sadly, pianist Joe Gilman's View So Tender: Wonder Revisited Volume 2 does not quite hit the mark.

Despite being labeled Volume 2, this is not an afterthought or a follow-up building on the success of a previously issued Volume 1. Both discs were recorded the same time but, because of the amount of material, have been issued on two CDs.

The songs, like most of Stevie Wonder's compositions, are catchy gems with interesting musical twists. Gilman, an accomplished jazz pianist, does not slavishly reproduce them but interprets them in his own way. He builds on the raw material with intricate improvisations and makes them his own without losing sight of Wonder's ideas.

He is backed by the sympathetic and capable rhythm section of bassist Joe Sanders—who rarely solos but, when he does, does so in tastefully restrained, short choruses—and drummer Justin Brown.

Unfortunately, the tracks offer nothing unpredictable or unexpectedly interesting. There is the catchy tune, courtesy of Wonder, Gilman's superior pianism and then the next catchy tune again, sometimes following a short bass solo, but often not. Despite there being no real weak spots, the repetition of similarly designed tunes make the record a tad monotonous.

Why would songs with such distinct melodies and hooks sound somewhat alike? Perhaps it is because the way the pieces are interpreted and built on. They do not vary much from one to another. The improvisation and the interpretation of the material proceeds along a winning formula that makes for an intriguing listen on the first few tracks but then, with repetition, loses its luster.

This is a truly jazzy homage to a great popular composer by a master musician. The lack of variety in the interpretations, however, makes it a less than satisfying listen.

Cryin' Through the Night; Whereabouts; Knocks Me Off My Feet; You and I; Contusion; Bird of Beauty; Easy Goin' Evenin'; Another Star; Don't Know Why I Love You; As If You Read My Mind.