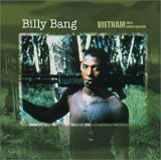 After a particularly intense solo, Frank Lowe slung his tenor saxophone over his right shoulder and looked toward the floor. Covered by a large knit cap, Billy Bang's tenor player held the pose throughout the trumpet solo, seemingly unaware of the machine gun his instinctive stance suggested he was carrying.

It was a private moment that he offered the audience, a glimpse at the enduring distress of the accidental soldier. The evening's performance was filled with such moments, intermingled subtly with the feverish music Billy Bang's band packed onto the stage of CB's Gallery with its debut performance of Bang's latest album, Vietnam: the Aftermath, on which he explores the memories that continue to haunt many Vietnam vets.

Bang was offered the idea of basing an album on his Vietnam experience by Justin Time producer, Jean-Pierre Leduc, and, after initial shock, agreed to go ahead with the project. The album quickly became a flood of catharsis for Bang, who had previously avoided his painful memories with tight-lipped silence and years of drug and alcohol use. Ranging from mournful hesitation to explosive force, Bang's compositions paint a varied picture, including many aspects of his time in Vietnam, from specific combat maneuvers, to villages he came upon, to the sense of loss he felt for fallen friends.

Enlisting help from five other Vietnam vets (Ted Daniel, Frank Lowe, Ron Brown, Michael Carvin, and Butch Morris conducting one track), as well as three civilian musicians, Bang creates music that resonates with the sound of the Southeast Asian scales he came upon in Vietnam, but holds onto the funk and bebop that he carried with him throughout. On "Tunnel Rat (Flashlight and a 45)," Bang starts off with a plucked Eastern melody, accompanied by Michael Carvin's crashing cymbals, before the group jumps into a progression of solos atop Curtis Lundy's walking bass. Bang's solo grows quickly from spirited bop to a rapid-fire series of sound effects, blurring the line between Bang's interpretation of the subject and the subject itself.

With "Yo! Ho Chi Minh is in the House," Bang uses a funky vamp as the foundation from which to launch a frantic hailstorm of notes, going as far as bouncing his bow off the violin strings before crescendoing to a long simulation of gunfire. This halting power is a common link between more conventional songs like "Saigon Phunk," with its com-fortable groove, and freer songs like "TET Offensive." On the album and particularly in person, the quick exhalations that Bang blows from his violin sound as if he is running farther inside himself, reaching for areas into which he has pushed deeper within over the years. But in cutting deeper into the thick of his own jungle, he offers listeners a chance to go with him, to begin, perhaps, to understand an experience that no one should go through alone.

Yo! Ho-Chi-Minh is in the House; Moments for the KIAMIA; Tunnel Rat (Flashlight and a .45); TET Offensive; Bien Hoa Blues; Mystery of the Mekong; Fire in the Hole; Saigon Phunk.