BY JOHN KELMAN
February 7, 2005
Sign in to view read count 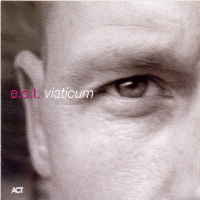 Together now for over a dozen years, e.s.t. has clearly developed a number of personal stylistic markers. Blending improvisation with a distinct pop sensibility that includes subtle use of electronics—with the exception of Dan Berglund's aggressive fuzztone arco bass—the trio has honed a sound incorporating elements of drum 'n' bass, electronica, funk, pop, classical and rock, without losing sight of its own voice. Often spoken of in the same breath as The Bad Plus, e.s.t. is the more elegant alternative, with considerably more finesse and richer colors than TBP's bombastic and monochromatic approach.

Still, after eight albums including last year's Seven Days of Falling , and an ever-increasing performance schedule that has seen them become one of the most popular jazz touring acts in Europe with some forays into the American market, is it possible that e.s.t. has begun to fall prey to its own devices, sacrificing innovation for formula? With its latest disc, Viaticum , the answer is yes...and no.

The common elements are all there: Berglund's distorted arco supplementing his supple pizzicato, Esbjörn Svensson's subtle electronic keyboard shadings tastefully enhancing his more dominant acoustic piano voice, and drummer Magnus Oström's combination of traditional drum kit with extended percussive techniques. While some groups make gigantic leaps from album to album, others grow gradually, and e.s.t. has a tendency to move forward in smaller increments, with each new album retaining a sense of the familiar while still forwarding new ideas that distinguish one release from the next.

Even more than before, Viaticum reflects the diverse musical tastes of the band. A recent "Musician's Playlist" article at Jazzviews found the trio citing influences as diverse as Pat Metheny, Deep Purple, Radiohead, Brad Mehldau and The Sweet, and Viaticum could only come from a group of players informed by sources as much outside the jazz frame of reference as from within. Tunes like "Tide of Trepidation," with its verse-chorus form and hypnotically repetitive bass figure, and the similarly dark yet lyrical title track both bear some relation to Radiohead. "The Unstable Table & The Infamous Fable" combines clever counterpoint with a solo section where Berglund's overdriven bass may have roots in heavy rock but, over Svensson's arpeggiated piano, has equal origins in impressionistic classical music. Oström's gradually building drum pattern is a prime example of the kind of dynamic control that makes this group infinitely more interesting than TBP. The hidden bonus track, a regular feature on e.s.t. releases, is this time an exercise in atmospheric ambience.

But as much as e.s.t. comes from a variety of sources outside the jazz tradition, improvisation is still a key element, the one thing that keeps it firmly defined as a jazz trio. Viaticum may have little to do with conventions like swing, but in the empathic and graceful interplay among Svensson, Berglund, and Oström there is still a clear link which is why, while TBP feels like a rock band approaching jazz, e.s.t. unquestionably comes from an opposing sensibility.