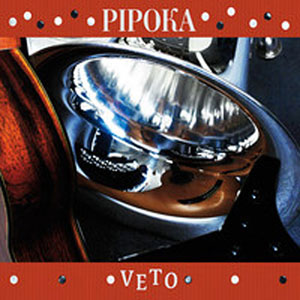 Pipoka is a Finnish trio, with its roots firmly entwined around its two active founder members, accordionist Veli Kujala and guitarist Jarmo Julkinen. Veto is still anchored in the original conception of chamber jazz, with highly structured pieces that provide ample opportunities for exploration and development, as well as a considerable dose of Latin America.

Key to this concept is versatility of approach and participants. Whereas its self-titled, 2004 debut (also on Rockadillo) featured compositions by original mentors like Egberto Gismonti, Hermeto Pascoal, Astor Piazzolla and Severino (Sivuca) Dias de Oiveira, alongside just two self-penned pieces, Veto finds newcomer Petri Keskitalo lending his skills to bolster their burgeoning compositional talents. Tubaist Petri Keskitalo has his own roots, spread across the diversity of Finnish contemporary music, from the Avanti Chamber Orchestra to the Helsinki Philharmonic, as well as the long lamented ethno-jazz quartet, Zetaboo. On Julkunen's "Diego," a tribute to seventeenth century Spanish guitarist Ortiz, the warm, percussive-blown bass lines bounce through the tune, rounding the feel of the music.

For a taste of their instrumental bravado there is an experimental approach on Kujala's "Wingsnaps," where the tuba growls its lines, plumbing similar depths to a Tibetan horn, as Julkinen's cavaquinho jangles in accompaniment and Kujala visits those micro-tones again—all inspired by a flight from Paris home to Helsinki. Pipoka lives up to expectations of Finnish musical expertise imbued, in equal measure, with respect for its own traditions, both inside and outside orchestral chambers, and a quirky sense of transnational humor. Even the album title, Veto, incorporates two contradictory meanings, with the local usage indicating tugging power or attraction.