By Friedrich Kunzmann
September 15, 2018
Sign in to view read count 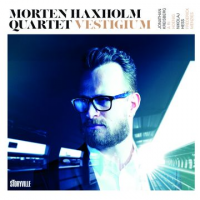 The world of bass players in modern and post-bop jazz can be divided into two currents. On the one hand, you'll find the dominant character who leads the compositions with a decisive hand and frequent moments of striking ostinatos. On the other, one finds a personality who seems to walk through the composition and, like camouflage, conceal moments of pure bliss within the harmonic context and overall texture. While the former at times seems to have the song serving his or her playing, the exact opposite is the case with the latter—which is where leader Morten Haxholm comes into the picture.

Like on predecessors Equilibrium (Storyville, 2012) and Quintessence of Dust (Long Life Records, 2015), Haxholm once again joins forces with New York-based virtuosos Ari Hoenig on drums and guitarist Jonathan Kreisberg. Completing the three to form a quintet are saxophonist Frederick Menzies and Simeon Harris. In a similar vein to past endeavors by the Danish double bassist, Vestigium finds a band that is driven by swinging drum swirls and bopping piano and guitar crescendos, enclosing and lapping around striking ostinatos and telling melodic lines.

Kreisberg delivers some of his most dynamic solos while constantly remaining in dialogue with piano man Hess, who proves his impeccable capabilities as a bop improviser. Their exchanges on the opening "Occam's Razor" and "Vestigium" are representative of their paradoxically youthful and at once mature playing on the album. If Kreisberg has yet to establish himself as one of the arpeggio masters of his generation, this recording has to be the turning point. His unforgiving precision paired with vast speed and his sweet tooth ear can't help but grab the listener's attention, though never distract from the superordinate compositional framework.

Of course, the soloists wouldn't sound half as good if intriguing compositions weren't a given. Haxholm's style represents a catchy fusion between old-school bop structures and more modern hook-oriented exercises, while always equipped with classic melodies. On top of that, he doesn't grab the center of attention as an instrumentalist but does his magic outside of the spotlight, slipping into the shoes of a conductor and giving his sidemen plenty of opportunities for conversation, squabble and reconciliation.

Slower ballads, such as "Central Park West"—one of two standards on the record—capture the overall dynamism of this band's interplay and, once again, give the soloists room for extended lyricism, at times capable of moving mountains.

Apparently the word "vestigium" refers to "the spiritual remains/imprint of a person or a feeling. As when you watch a good friend leave on a train, but you have a feeling of them still being around." While not a profoundly spiritual sounding record, a positive lasting impression is guaranteed. Here's hoping these cats stay around for a few more rounds.