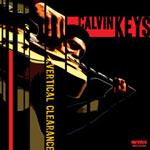 In 1969, Keys made the move to Los Angeles and recorded his debut as a leader, now long out of print, with drummer Paul Humphrey and organist Billy Osborne. In 1972, Keys recorded Shawn-Neeq for Gene Russell's acclaimed Black Jazz label with Doug and Jean Carn, followed by Proceed With Caution shortly thereafter. An introduction to Ahmad Jamal led to Calvin Keys' membership in Jamal's combo, the first appearance of an electric guitar in the group, for a six-year period which ended in 1980. In 1996, Calvin Keys had quadruple bypass surgery and accomodated his lifestyle to reflect this. He has recorded five albums since the Millennium.

Vertical Clearance offers Keys an opportunity to record with an aggregate seventeen musicians, many of whom are old friends, including organist Doug Carn and Sonny Fortune, one of the three saxophonists. It is essentially a reprise of the soul jazz recordings from the early '70s and his recordings for Black Jazz Records. The music is soulful and funky in the manner of the many recordings that guitarists like Melvin Sparks and Jimmy Ponder recorded during the 1970s and '80s.

The all-original material from this album is reminiscent of the R&B/jazz produced during that era, which remains more complex than today's contemporary jazz (ie. smooth jazz). Sonny Fortune, Paul Hanson and Doug Rowen are heard on saxophones, and vibraphonist Roger Glenn is featured on "Blue D," giving a Cal Tjader feel to the tune.