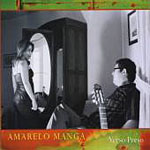 The spectacularly revolutionary nature of the Tropicalismo Movement in Brazil and its undying quality is what makes this recording, Verso Preso by Amarelo Manga a truly significant one. The group pivots around the vocalastic emotion of Lilian Raquel and the music of Cláudio César Ribeiro, who just happens to be a fine guitarist, whether playing acoustic or -electric guitar. The music is deeply rooted in the skippety-skip and fibrillation of maracatu and other dancing rhythms of Pernambuco in the Northeast region of Brazil, all forged in the fire, the heat and fervor of popular urban rhythms from the raw and dusty samba to the shuffling of bossa nova and molten emotion of contemporary Brazilian music.

Raquel has a fine voice, which, born and bred in that corner of the Northeast of the world's most mysterious and alluring country, soars in all its contralto glory. It swoops in and drinks of the emotion of the songs she sings and the characters she inhabits. She makes the fact that Brazil is able to produce an unbroken line of vocalists through Elis Regina, Ithamara Koorax, Anna Estrada, Rosa Passos and Mônica Salmaso is a continuous source of wonder. Cláudio César Ribeiro is an extremely mature and accomplished composer, as songs such as "A Promessa" and "Água De Rio (Vou Guardar no Samba)" will testify. His composition, with Lenine, "Candeerio Encantado" and "Aonde Ela Me Levar (Minha Jaganda Vai Partir)" are both fine works, generously ensconced in "maracatu cearense" rhythms and would glorify the record in its entirety had he not shown how multi-faceted he really is.

As a guitarist Ribeiro is understated and elegant throughout. His work on Aonde Ela Me Levar (Minha Jaganda Vai Partir)" as he plucks and flutters his fingers over the strings in accompaniment to the berimbau, surdo and tarol is admirable. His electric guitar solos are spry and yet sinewy. On "Verso Preso," an outstanding, dancing, song with a soaring, uplifting quality, Ribeiro gently nudges the accordion of Arnaldo Fonseca as it soars with the celebratory nature of the song. On "Temporal" in a short solo—no more than a chorus, which he shares with Raquel—he leaps across the frets, dodging the her voice as he plays in rapidly ascending, exhilarating single-note lines. Elsewhere, on Chico Buarque's "Quem Te Viu, Quem To Vê," which is rendered with sheer beauty by Lilian Raquel, his work is gently ironic and dances interminably.

There is another reason for the memorable nature of this album and it is the care with which the music is thought out. There is a strong sense of the history of Brazilian popular music—especially Tropicalismo standard songs. The blend of concrete music together with a deeper sense of the music's origins is all pervasive and while Buarque is represented, Gilberto Gil and Caetano Veloso may not be visible, except in spirit, in the music of Ribeiro itself. And of, course, every musician—bassists, drummers and percussionists acquit themselves with flying colors on this remarkably contemporary Brazilian music album.