Vandermark 5 and Atomic: Double Bill at the Vortex in London 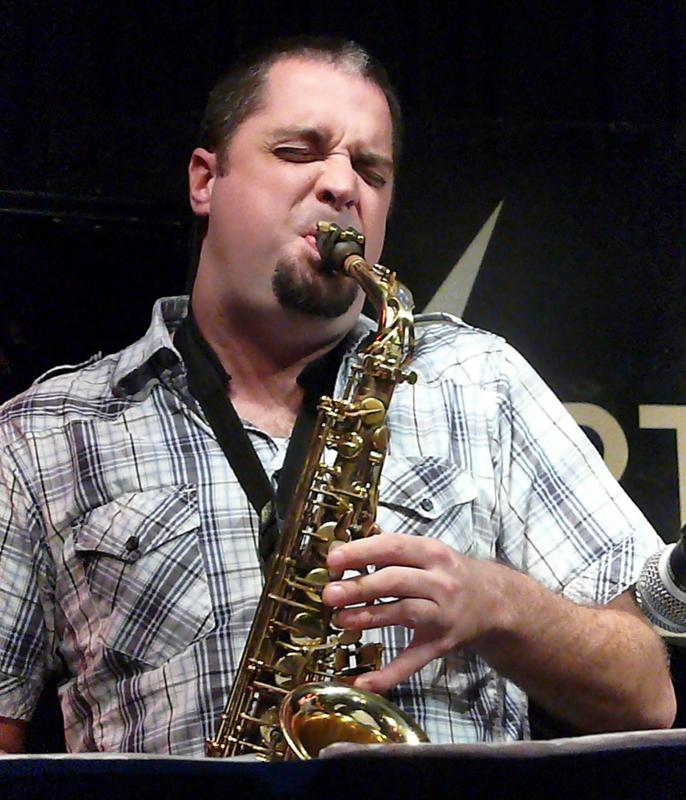 It was difficult to avoid a frisson of pleasurable anticipation at the sight of the handwritten sign proclaiming "Totally sold out" taped onto the door of north London's Vortex Jazz Club. A feeling compounded by the presence of the BBC's mobile recording unit parked outside. This was going to be a good night. And why shouldn't it be with a double header by the Vandermark 5 and Atomic, two of the hottest working units in contemporary jazz, newly arrived in the UK for the last leg of an 11-date European tour. Leader Ken Vandermark's Facebook fan page with his characteristically unflinching self analysis in a blow by blow account of the tour suggested that something special was in the offing.

After the introduction from Jez Nelson of the BBC, the Vandermark 5 blasted out of the gate with the familiar refrain of "Friction" from Beat Reader (Atavistic, 2008). As a statement of intent it was unmistakable: they meant business. And the leader's fiery tenor saxophone in duet with Tim Daisy's whipcrack drums showed how. As the reedman's shrieks and ascending screaming phrases dropped away, the drummer carried on alone in a display of astonishing speed and articulation, before a concluding crash signaled the rest of the band's re-entry. It was a great opener, full of energy and excitement; paradoxically tightly arranged but executed with loose panache. Vandermark's wry self deprecating sense of humor manifest itself in his introductions. If he ever needed a break he should pursue a second career as a standup comic.

Thereafter came three new compositions, workshopped during a Chicago residency in August, and now being road-tested prior to eventual commitment to disc. "Fables Of Facts" boasted a wonderfully woozy riff shared by the twin saxophones which launched a typically fluent and serpentine exploration by Dave Rempis on tenor, with supportive riffing from Vandermark. Subsequent switches posed a series of improv events by subsets of the band. Though they were only five strong, the range of sounds achieved through Rempis and Vandermark's doubling, Fred Lonberg-Holm's cello frontline/rhythm section ambivalence and Daisy's timbral nous, belied numerical limits. Standout passages included a duet of cello and drums where Lonberg-Holm's litany of emphatic scrapes, wiggling bow underneath the strings and on the body of the cello was matched by Daisy's percussive spread extracted from gongs on drum heads and deftly attenuated cymbal work. Cathartic ensemble interplay atop a funky cello riff segued into dual aerobatics from the twin horns, until they casually veered into a final repeated unison. 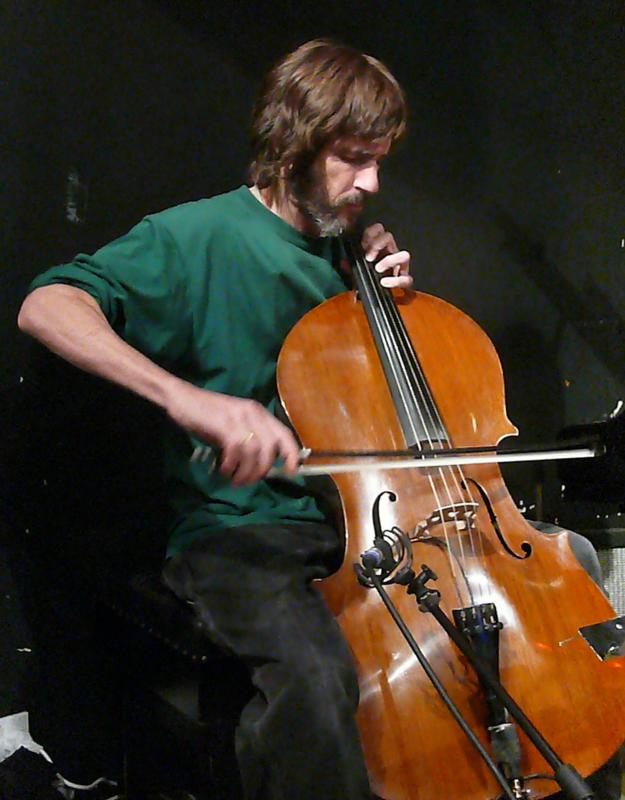 As Vandermark remarked, their pieces this evening were longer than they were short, but they were packing a lot into them. "Location" and "Leap Revisited" continue the penchant for rapid change written into the fabric of the charts. Cued by the leader's striking whole body movement, the former concluded with Rempis blowing hard on tenor contrasted against a shifting soundscape of electronics from Lonberg-Holm, until an unexpected halt. While the latter began as a showcase for the cellist's virtuosity: his searing bowing rode a roiling tide of drum and bass, evoking storms, hurricanes and other assorted malevolent weather systems. Further shifts ultimately revealed what stood as another highlight: after complementary horn solos, Vandermark's tenor and Rempis' alto combined in wild careening colloquy accompanied by Daisy's frenzied drums, before the leader rounded into a forceful group finish.

It was a tough call to have to follow such a formidable opening set, but Scandinavian supergroup Atomic rose to the challenge. Combining a Swedish front line of Frederik Ljungkvist on reeds and Magnus Broo on trumpet with a Norwegian rhythm team of drummer Paal Nilssen-Love, pianist Håvard Wiik and bassist Ingebrigt Håker Flaten, Atomic featured three numbers from their recent Theater Tilters (Jazzland, 2010), as well as two new pieces, in an hour long performance.

An uncompromising start found Nilssen-Love laying down a blistering fusillade over which the trumpeter and reedman together reiterated the rapid punchy phrase from Wiik's "Fissures." Broo smeared a trumpet exhortation of half valve effects and squeals against the hyperactive drums, augmented by stabbing Morse code piano from Wiik. A sudden stop presaged a complete transformation of mood with Ljungkvist's clarinet cavorting to a lilting beat, the reedman's bending and twisting frame matching the unfolding trajectory of his musical line. Space soon appeared for a sturdy pizzicato bass feature by Haker-Flaten, eventually subsumed by a gradually heating duet for clarinet and trumpet over a freeform pulse, presaging a return to the opening theme.

There was an obvious similarity in approach to the Vandermark 5, particularly in the facility with which they switched between the composed and the improvised. Touring as a double bill begs an exercise in compare and contrast. In fact the similarities outweighed the differences. On the most basic level, both are quintets, with a long history interrupted by very few changes in personnel. Both spotlight exciting soloists with a high level of instrumental skill, span a wide stylistic reach, and most importantly their well-crafted charts contain cunning pockets to be filled with improvisational wares. 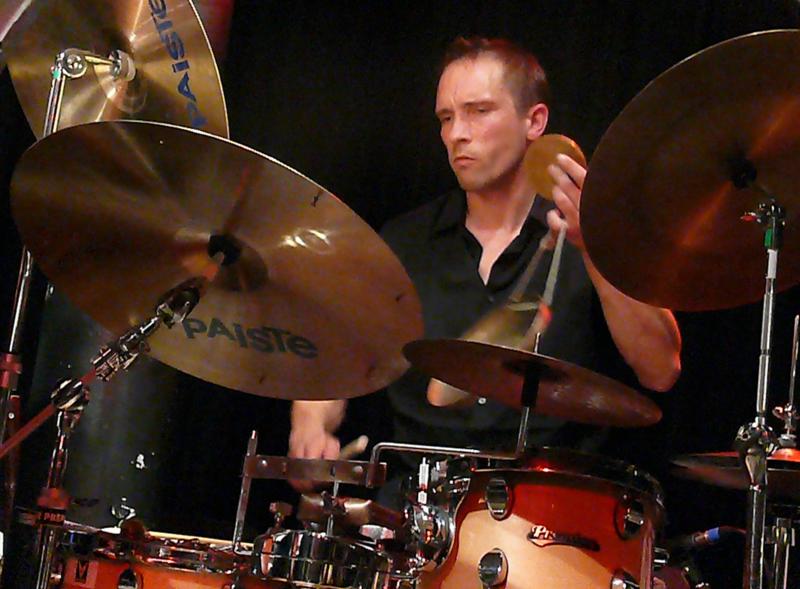 What followed confirmed their predilection for multi-sectioned compositions creating diverse environments to frame the soloists' excursions. Noteworthy events included Broo's smoky trumpet ballad amid a tapestry of disconcerting percussive timbres distilled from his kit by Nilssen-Love on Ljungkvist's "Panama," and a sparse improv start to Wiik's "Unity Toccata" with the composer first under the bonnet, then belaying a quickfire rippling sojourn on the keyboard. However the highpoint of an excellent set came at the end on Ljungkvist's "Andersonville," named after the Swedish neighbourhood of Chicago (with perhaps a nod to the now departed proprietor of the legendary Velvet Lounge). It started with a delightful exhibition of piano and percussion textures with Nilssen-Love striking his cymbals and drums with all manner of objects including his hands, smaller cymbals and woodblocks. A serene horn unison ensued, seemingly oblivious to the madcap procession of percussion, piano and arco bass. Later came a strolling interlude for Broo's bluesy trumpet together with more marvellous collective interaction culminating in abrupt closure which provoked laughs of incredulity from the audience.

Expectations were splendidly fulfilled, the only downside being that, as infrequent visitors (both bands last played London, separately, in 2002), it would have been even better to hear them for a whole evening, preferably over several nights. But for those wanting more, fortunately both sets were recorded by the BBC and will be broadcast later in the Autumn.