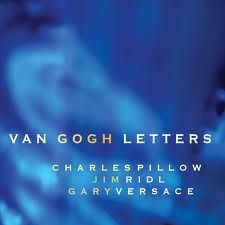 Those who like Debussy's Nocturnes will love what this trio does on the crossover Van Gogh Letters. Three master musicians venture into saxophonist Charles Pillow's softly articulated, impressionistic/minimalist tone poems. Inspired by Letters of Vincent Van Gogh, Pillow translates the great artist's phrases and sentences into painterly sounds evocative of a quieter, less-pressured epoch. The trio embarks on a journey through the varied places and moods that the gentle, saintly, and troubled Van Gogh saw and painted with intense beauty and emotion. French musical impressionism, which evolved contemporaneously with Van Gogh's art, was the genre that suggested the pentatonic scale to jazz musicians, and Pillow pays homage to that nexus throughout.

"Painters Love Nature" (all track titles are direct quotes from Van Gogh in English translation) journeys through the country with Van Gogh, as the woodsy sounds of Jim Ridl's keyboard and Gary Versace's accordion recall Debussy's Prelude a l'apres midi d'un faun. "Did I tell you about the storm?" begins with a bass clarinet motif over some rustling synth and accordion sounds, evoking the ominous calm as the storm clouds accumulate. There are piquant improvisations suggesting forest animals, evolving into a syncopated rhythm with a shade of John Coltrane's A Love Supreme (Impulse!, 1964) motif, recurrent throughout its various movements. An oboe evokes the lone star in the sky on "Over these roofs, one single star," a simple ¾ rhythm shifting around like the star moving across the night sky. The almost blinding bright stars of Van Gogh's famous "Starry Night" painting comes to mind, if only by contrast, and the song upon which Don McLean based it.

Pillow's English horn gives a feeling of contemplative, delicate brush strokes on canvas on "My brush goes between my fingers like the bow on a violin," while "That same night I looked from my window" features Versace leading up to a puzzling major chord, with yet a slightly insomniac feeling of discomfort, followed by various modal transitions that go well beyond Debussy in their modernity.

Echoes of A Love Supreme are, again, heard, In "The sea was yellowish near the shore" in the low register of bass clarinet, while an oboe chant against a light sprinkling of sounds lends "At the horizon, a streak of light" a sense of peaceful, wide open spaces like the sea. The oboe/accordion duet of "He who dances" follows; a peasant dance with the slightest hint of bebop. "After a year in Paris, I'm going south" renders a sense of sadness and loss on departure, in a dirge-like series of accordion chords, underscoring an oboe reverie, and finally leading to synth sounds evoking late night contemplation. "Vincents' Rhapsody" echoes Van Gogh's intensity and perturbation, becoming lyrical and, at times, agitated. Finally, "I shall begin to Paint" captures a variety of tonal colors suggestive of Van Gogh's rich palette, with a dice of Latin rhythms.

This recording strives to follow the poet Keats' maxim: "Beauty is truth; truth beauty." Don't expect a rush, but do expect to be touched.

Painters Love Nature; Did I tell you about the storm?; Over these roofs, one single star; My brush goes between my fingers like the bow on a violin; That same night I looked from my window; The sea was yellowish near the shore; At the horizon, a streak of light; He who dances; After a year in Paris, I'm going south; Vincents' Rhapsody; I shall begin to paint.